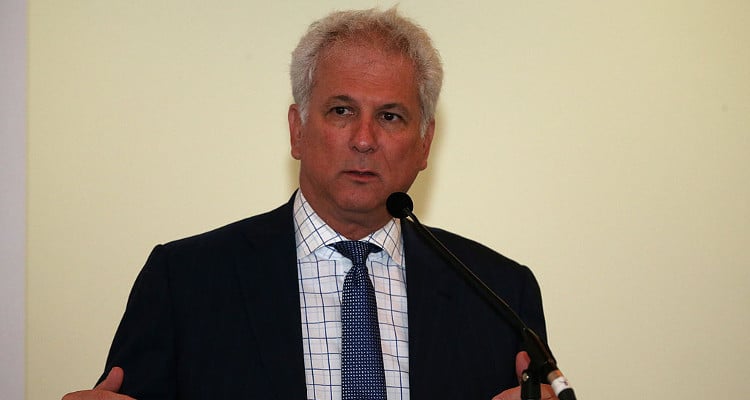 While Nancy Kerrigan is dominating Dancing with the Stars, her cheerleading squad includes her husband and their children. The former figure skater is married to Jerry Solomon, her long-time manager.

Jerry Solomon started his career as a sports manager. He was marketing president of ProServ and represented Kerrigan. When the ice-dancer was at the height of her career, Solomon was working on securing her $3.0 million worth of endorsement deals with Revlon, Reebok, and Campbell’s soups.

Currently, he’s the president and CEO of Stargames LLC, a sports marketing, management, and entertainment company founded in 1994. Solomon’s clients have included a variety of athletes such as #1 world-ranked tennis legend Ivan Lendl, three-time Olympic gold medalist in volleyball Karch Kiraly, five-time Olympic medalist Shannon Mille, and Nancy Kerrigan among many others.

As the CEO of a sports management company, he has produced a number of events. Some of the well-known ones include King of the Beach Invitational, Queen of the Beach Invitational, Scottish Grasscourt Championships, NetJets Showdown, BNP Paribas Showdown/New York, and Tennis Night in America. He has produced events for his wife such as Nancy Kerrigan & Friends, Tribute to American Skating, Halloween on Ice, One Enchanted Evening, An Evening of Country on Ice, A Holiday Celebration on Ice, Footloose on Ice, and Nancy Kerrigan Golf Classic.

#2. He is a Television Producer

Over time, he expanded into other branches of media. He produced TV shows like Spike!, Countdown to Sports Series, Ivan Lendl: Return of a Champion, Colors of Winter, World of Tennis, Nancy Kerrigan’s World of Skating, Dreams on Ice, and Halloween on Ice: Behind the Screams.

He authored the book, An Insiders Guide to Managing Sporting Events, and is an adjunct professor at The University of New Hampshire and UCLA Anderson School of Management. He has also served in executive positions at different sporting events. He’s lauded as one of the best in the sports management business.

With his extensive body of work, Solomon must have amassed a sizable net worth. Unfortunately, it hasn’t been calculated yet. However, he has helped Kerrigan bank a net worth of $8.0 million in her career.

#3. He was Married Twice Before

A year after Kerrigan retired from competitive skating, she married her manager, Jerry Solomon in 1995. The ceremony was held in Boston and got some real estate in The New York Times wedding section. According to the wedding announcement, he graduated from the University of California at Los Angeles and received a master’s degree in international business from Columbia University. His father, Edward Solomon, is a chief executive of the retail chain Shoe-Town Inc., and his mother, Roberta Madison, is from Malibu.

It was Kerrigan’s first marriage and Solomon’s third. He had been married twice before, though we only know about his second wife. He has a son, Clay (born 1989) from his second marriage to Kathy Solomon. She served as a onetime tournament manager in Solomon’s previous company, ProServ, and was living in Potomac, MD. She didn’t travel much with her husband who was always on the move, but she supported him in his career.

#4. Their Relationship Turned into a Scandal

When 25-year-old Kerrigan married the 41-year-old, their age difference raised a few eyebrows. But that was nothing compared to the homewrecker allegations against Kerrigan, when they went public with their relationship.

After the infamous knee-bashing incident by rival Tonya Harding’s ex-husband, Kerrigan was going through a streak of bad luck. She was becoming a media bad girl with a temper. Adding to it was her relationship with her much older, technically married, manager.

Solomon was Kerrigan’s manager from March 1992. In July 1994, they revealed their “personal relationship.” It came to light that he was separated from his wife since 1993 and was in the middle of divorce proceedings. In the divorce papers that were since publicized, Kathy Solomon alleged that her husband had an affair and promised to reveal his partner at the hearing. Though her name wasn’t mentioned, all fingers pointed to Solomon’s figure-skating client.

Jerry Soloman had the dual task of defending Kerrigan and keeping the outside pressure off his charge, “My situation with Nancy is completely separate from my situation with Kathy,” adding that they had separated before his relationship with the figure skater started. Despite Solomon’s efforts to keep Kerrigan’s mind focused on her game rather than the scandals, the pressure apparently got to her and she botched her opening at the Ice Wars: USA vs. the World.

Kerrigan’s mother, Brenda also defended her daughter saying, “Is Nancy seeing Jerry? Yes. Was she seeing Jerry while he was still with his wife? Absolutely not. She would not ruin someone’s family.”

But their affair was all but public by then, and many believed that their romance was brewing from the time of her knee-bashing incident. They were even seen vacationing in Bermuda. After Kathy’s allegations, Nancy Kerrigan decided to refute it and downplay the accusations.