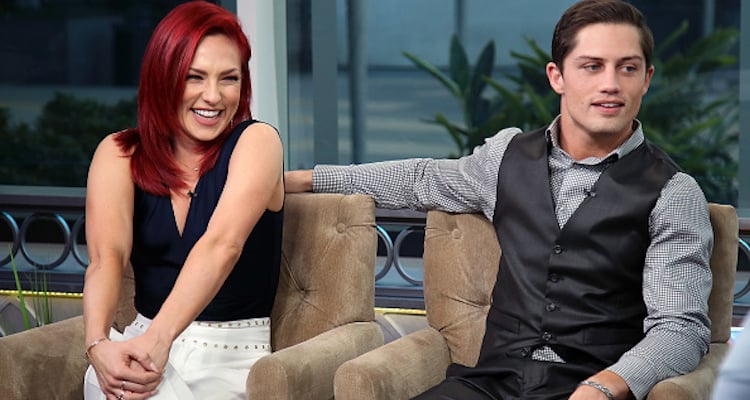 The chemistry between Dancing with the Stars,’ Bonner Bolton and professional dance partner, Sharna Burgess is undeniable and the world is noticing! Are they a couple yet? Fans want to know! Here are the details.

At the season 24 premiere of DWTS, Bonner Bolton’s bull rider career was explained and viewers were saddened to hear the story of his accident and former paralysis. Many people are rooting for Bolton now, as he has made a near-full recovery and has been dancing like a champ. But his dance skills aren’t the only reason he’s buzzing in entertainment news. People are wondering is Sharna Burgess Bonner Bolton’s girlfriend? Here’s everything you need to know about the handsome bull rider and his gorgeous dance partner.

It’s no secret that the spicy duo have a special connection. Various interviews, photos, and moments from the show reveal their incredible mutual attraction. The pair is getting a lot of attention, more so for their rumored dating relationship than their performances. “Bonner Bolton Grabs Sharna” made headlines last week, after backstage video of Bolton’s wandering hand went viral. Bolton and Burgess were hanging out on set back stage with the cast when Bonner is seen reaching around Burgess, placing his hand on her waist. But it didn’t stop there and his hand dropped lower toward Sharna’s…er…crotchal region. Burgess gracefully moved his hand aside, and the two remained aloof, but eagle-eyed viewers who noticed made sure to put the incident on blast.

Bolton told Extra TV that he was watching the television screen, and had no idea what was happening. “I knew it was her that bumped into me, and I put my arm around her, and I was turned to watch the TV screen, and I felt her push my hand away, and honestly had no idea.” TMZ asked Burgess about the situation and she eloquently and confidently defended her dance mate saying, “You can see when I move his hand that he had no idea where it was.” She explained he had no reaction and that it was an “innocent mistake that was truly blown so far out of proportion.” She also took to Twitter to respond to the hundreds of comments accusing Bolton of groping her.

Anyone who has the ridiculous idea that it was intentional…is straight up stupid. As in lacking th intelligence to realize it was innocent

Burgess continued to say that Bolton was mortified when he heard about the accusations. She told TMZ that he isn’t used to this kind of attention from the public, and that his family was watching during the show so he would not have done something like that intentionally. She described the bull rider-turned-dancer as a “southern gentleman” and based on the way he’s been on the show, we believe her!

All that said, the duo is committed to focusing on the show and has no time to pursue a relationship this early. “We have a great chemistry getting to know each other, but obviously we’re three weeks into this thing of having met each other in his ranch,” she said. “We’re having a lot of fun, but our priorities obviously are getting Bonner through this competition as far as he can possibly go.”

Dancing with the Stars Recap

On Monday night’s Dancing with the Stars, Chris Kattan was eliminated from the show and he shared some emotional moments from his surgery. After the announcement of his elimination, he thanked his dance coach, Witney Carson and said he was disappointed his traumatic experience breaking his neck was not shared earlier on. “I wish that my surgery and all that was noted before, but it wasn’t, and that’s okay. But I had an incredible, incredible time.” Viewers may have noticed that Kattan looked stiff during his performance, but he explained the reasoning to reporters after the premiere. “I broke my neck and I had four surgeries regarding that the last 20 years basically.” He had a surgery in his back, and one through his throat. “I had to be careful for a really long time.” The actor said the injury was due to a “stunt thing,” but did not share any further details. According to People, Kattan told reporters he was advised not to be so stiff while dancing, “but it’s hard for me to not be stiff,” he said.

It’s sad to see any contestant be eliminated from the show, but there is still a long way to go on Dancing with the Stars! Tune in to ABC on Mondays at 8:00 p.m. EST to see which pairs move forward!