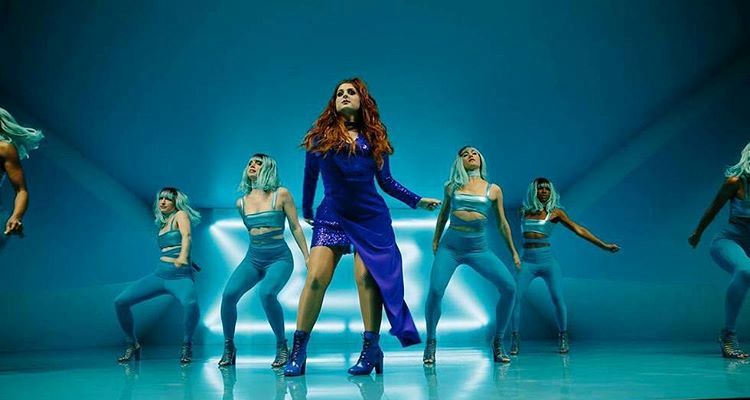 Meghan Trainor’s “Me Too” video was reposted after it the singer removed it due what we’re calling the Meghan Trainor Photoshop Scandal. The singer realized that her waist’s size had been reduced in the video and was furious; she personally addressed her fans about the situation and apologized about the video’s digital alterations. On The Howard Stern Show, the “Me Too” singer said, “I’m the poster child for no Photoshop!”

“Whenever I post a picture of my legs on Instagram, everyone comments on how f*cked up my knees look,” she explained. “My right leg is an inch and a half thinner than my left because my muscles deteriorated and never recovered.” This is why she Photoshopped the abs picture above. “Yes, I did Photoshop it, but I was trying to make my thinner leg look bigger to match my other leg!!! All I want are big, thick thighs and I hate how skinny my legs are.”

Photoshopping is no secret in the entertainment business, and it tends to do more harm than good to girls as well as boys. No matter how old you are, you always see someone on the cover of a magazine looking perfect. Rumer Willis recently addressed her Photoshopped magazine cover and called it a form of bullying since she didn’t ask for the alterations. Here are five other celebrity pictures that were Photoshopped for the cover

The singer/actress was very upset when she realized she was Photoshopped on a Modeliste magazine cover at 19.  She took to Instagram to express her outrage about how she found her “19 year old hips and torso quite manipulated [sic]” and that it was things like this that “make women self conscious, that create the unrealistic ideals of beauty that we have. [sic]”

Both GQ and Flare magazine have edited Lawrence’s arms, legs and stomach to make the already-svelte actress unnecessarily look even slimmer. The actress, who is never shy about her love of food and who works to maintain and healthy body, is one of the last people we’d think would even be considered for being Photoshopped!

Without her knowledge, Oscar winner Freida Pinto had her skin lightened by L’Oreal during one of their ad campaigns. It’s no secret that lighter skin is coveted in Asia with people going as far as buying creams and solutions to bleach their skin, but to see it happen anywhere is still disturbing.

Like we said before, women aren’t the only ones who get Photoshopped and they aren’t the only ones who feel the stress of unrealistic body expectations. It’s usually not easy to spot the use of Photoshop on men, but in the case of tennis player Andy Roddick’s appearance on the cover of Men’s Health, it was very obvious. Roddick even spoke out about it himself pointing out that he suddenly was missing a birth scar on his arm.

In these magazine covers, the Lemonade singer has her skin altered from lighter to darker. And in some cases darker to lighter, depending on the magazine. Why anyone would want to alter Beyonce in any way is beyond us!