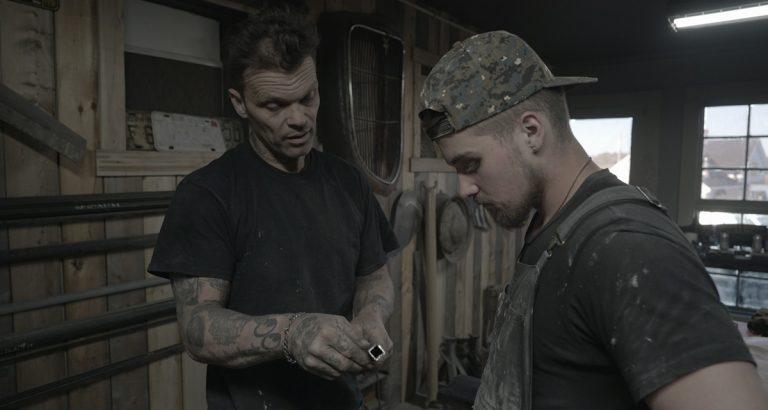 Discovery Channel’s newest hit series Bad Chad Customs follows Chad Hiltz’s creative custom car jobs at Hiltz Auto Co. (aka Green Goblin Customs). Joining him are his friends; his fiancée, Jolene MacIntyre; and his son, Colton Hiltz. Chad’s teaching Colton the ropes of the business and it makes for some great TV. Our Colton Hiltz wiki will give you more insight into Chad’s relationship with his son.

Colton Hiltz was born on October 4, 1998 and is 20 years old. He’s Chad Hiltz’s son from his marriage to Carla Mooring-Hiltz.

Chad became a father for the first time when he was 16. After separating from the mother of his eldest daughter, he married Carla Mooring when he was 27.

A year after Colton was born, Chad and Mooring divorced. Chad and Colton have revealed on the show that Colton mostly lived with his mom and saw Chad occasionally.

After his divorce from Mooring, Chad had a daughter, Harlee, with Mandy Mosher. They have since broken up and Chad is currently engaged to Jolene MacIntyre, the manager of Green Goblin Customs.

From his social media, it appears that Colton and his half-siblings have a good relationship.

Colton was born and raised in Spring Hill, Nova Scotia where Chad had moved to from Kingsport. In his hometown, Colton played in the Nova Scotia junior hockey league.

He played forward for the Cumberland Colts from Spring Hill. He appears to be a good player, too, with good stats and scoring five points in two seasons from 2016 to 2018. He has scored three points for his team in the 2018-2019 season so far.

He Is an Apprentice at Chad Hiltz’s Shop

Words can’t explain can’t believe it !! Thanks for every ones support an who watched! Next Tuesday night fer a little more 🤙🤙🤙

After his divorce from Colton’s mother, Chad came to Canning, Nova Scotia where he set up Green Goblin Customs. He became known in the local setting of Canning for customizing cars using whatever minimal resources he found in the town, and for hosting the annual auto show, Rockabilly Weekend, in his backyard.

In 2018, Colton moved to Canning to be with his father and work in his shop. He’s now an apprentice and body man at Green Goblin Customs.

Colton’s Instagram shows that he shared his father’s love for cars long before he became his dad’s apprentice. Working at Green Goblin has given the father and son the opportunity to bond over their common passion.

As we’ve seen on Bad Chad Customs, Chad can be a little hard on his son and give him a tough time. MacIntyre sympathizes with her fiancé’s son, but also knows that’s Chad and Colton’s unique dynamic.

While Chad always questions Colton’s input, he does take his suggestions. But that also means that Colton feels the pressure for his input in the custom job in order to succeed.

He Appears to Be Single

Judging from his Facebook statuses, Colton has been in a few relationships. He dated one Gabby Simmonds in 2013 and then a Katy Reid in 2014. He was in a relationship in 2017 and 2018, too. However, it appears he doesn’t have a significant other at the moment.