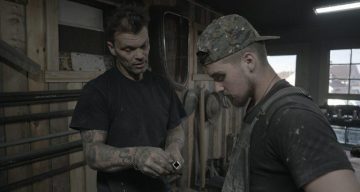 Bad Chad Customs is the new Discovery Channel show that premiered on January 1, 2019. It takes us into the world of master car artist Chad Hiltz, aka Bad Chad. He’s the savior of scrap cars, customizing them into award-winning vintage machines at his shop, Green Goblin Customs. Where is Bad Chad’s Green Goblin Customs located? Keep reading, and car enthusiasts will be raring to drop by Chad’s shop.

Where Is Bad Chad Customs Filmed?

After bouncing from place to place, Chad Hiltz finally set up his dream car shop in Canning, Nova Scotia, in Canada. He named his shop Green Goblin Customs after the enterprising villain from Marvel’s Spider-Man comics.

Bad Chad Customs is primarily filmed in Hiltz’s shop in Canning. However, the show occasionally travels to car shows in Canada and the U.S., as well as to locations where Hiltz sources the beat-up cars he will customize.

In the season premiere, Hiltz and his crew at Green Goblin Customs make a one-of-a-kind coupe he named Royal Respect. The car was showcased at Moncton’s annual Atlantic National Automotive Extravaganza, where Chad sold Royal Respect for a profit.

Hiltz built his garage from scratch on the outskirts of Canning. Green Goblin Customs sits on a vast, open property where Hiltz hosts the annual Rockabilly Weekend. The annual event brings in car enthusiasts with their own machines to showcase along with live music, dancing, tattoos, contests, and a boost to the economy of Canning.

Back in 2017, Chad was building a replica of Ralph Lauren’s iconic Bugatti from scratch and sharing the progress on social media. Production companies saw his work and signed him on for the show.

With the success of the show, Chad can no longer monetize on the name “Green Goblin,” due to licensing issues. So the business is in the process of rebranding as Hiltz Auto Co. and already has official merchandise under the new name on sale.

What Is Bad Chad Customs About?

Chad Hiltz of Kingsport, Nova Scotia has loved vintage cars since he was a child and always planned to own his own custom shop one day. He first opened a shop on an oceanfront property in his hometown.

He would later relocate to Canning, where he’d build Green Goblin Customs. Joining Hiltz is his son and apprentice, Colton; fiancée and shop manager, Jolene MacIntyre; friend and builder, Aaron; and mechanic, Alex.

The rural town of Canning isn’t exactly a car artist’s dream location, with the lack of resources or big budgets. However, Hiltz is the MacGyver of car customizing, finding creative ways to remodel cars.

Canning was once a shipbuilding hub with a thriving shipping and rail network. That leaves Chad to source parts from boats, airplanes, old lockers, and other old cars to build an engine.

The limited resources of Canning can really test a car artist, but Bad Chad has many tricks up his sleeve for building his machines within a budget. Check out more of the Green Goblin crew’s custom cars on Bad Chad Customs, Tuesdays at 10:00 p.m. EST on Discovery Channel.