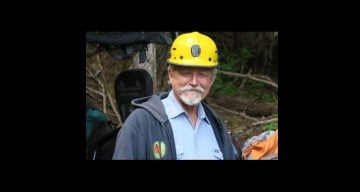 When “Dakota” Fred Hurt and his son, Dustin, left Gold Rush in season 4, we thought we’d never see the veteran miner on TV again. However, fans were ecstatic when Dakota Fred made his return in 2018 with Gold Rush: White Water. Now Fred and Dustin are looking for a fortune in Alaska’s McKinley River, while Fred gets married along the way. Our Dakota Fred Hurt wiki has more on this bad-ass gold nugget.

He Was a Commercial Diver

The Hurt crew is different from the regular cast of Gold Rush in that they don’t rely on heavy machinery to dig gold on land. Fred and his team look for gold in the deep, unforgiving waters of the Alaskan wilderness.

Originally starting his professional career in construction during the late ‘60s, Fred worked as commercial diver in the oilfields of the Gulf of Mexico. There, he learned underwater construction, demolition, and salvage. He would later adapt those skills to underwater mining.

His initial attempts at a mining career at Porcupine Creek and Caribou Creek weren’t successful. He went on to work in claims in Nevada, Wyoming, and Montana. He returned to Alaska in 2008, where he and his team extracted 600 ounces of gold from a Little Squaw Lake claim.

Unlike the other spin-offs of the franchise, Gold Rush: White Water will see Fred and his son dive deep into McKinley Creek’s raging waters where they believe there’s a fortune of gold in the river bed. They’ll use equipment to suck up the material and process it to get the gold.

His mining business along with his reality show career have earned this gold-digger an estimated net worth of $6.0 million.

While Fred was looking for gold in McKinley Creek, he also struck gold in his personal life. The miner tied the knot with Jennifer Sheets in 2018.

Fred’s bio claims that he’s been married for a collective four decades—and Sheets is his third wife! He was previously married to Lorrayne Frances Leier, who passed away in 2015.

Sheets studied to be a paramedic at Los Medanos College in California.  According to her Facebook, she worked as camp cook for the Gold Rush production company, Raw TV, from May to October 2018.

She was previously married. Her husband passed away in 2014 after battling hepatitis C, kidney failure, and diabetes.

She regularly accompanies Hurt and his son on their mining adventures as Hurt’s executive assistant. And she does, in fact, cook for his crew from time to time.

He Has Four Kids

Fred is father to four children from his previous marriages. We’re familiar with Dustin Hurt, a contractor, wildland firefighter, and his father’s partner in crime. He costars in Gold Rush: White Water.

His other son is a pastor. He officiated Fred’s wedding with Sheets.

Darla Matlock, Fred’s eldest daughter, was also present at the wedding. She currently resides in Texas and works in real estate.

Dakota Fred is so fit and active that it’s hard to believe he’s a septuagenarian with six grandchildren and five great grandchildren.

He’s also stepfather to 26-year-old Zackary Sheets, Jennifer’s son from her previous relationship. A professional logger, Zackary was featured in the Discovery Channel show, Siberian Cut. He now appears on Gold Rush with Fred and Dustin.

Also Read: Details of What Was Fred Hurt Doing in 2018?

His Left Leg Is Shorter

Without observing him closely, it’s impossible to notice that Dakota Fred has a deformity in his left leg. According to him, his left leg is “bent, twisted, crooked, and shorter” by four inches, and he wears a two-inch lift inside his signature cowboy boots.

Little known fact….my left leg is bent, twisted, crooked, and shorter ……but other than that, there ain't nothing…

But no one really knows how his leg got damaged. Over the years, Fred has told some fantastical stories about his foot that are not unlike many stereotypical “dad tales” about battle scars.

He shared one such too-good-to-be-true “story” about his foot on his Facebook, and it honestly sounds typical Dakota Fred. The alleged incident happened when he was two years old, out on a picnic in South Louisiana with his parents.

While his parents’ eyes were off Fred for a moment, the toddler Fred wandered to the edge of the bayou. That’s when a six-foot-long alligator supposedly lunged at him and grabbed his leg.

Fortunately, his father fought off the alligator and rescued Fred. But little Fred’s leg took a lot of damage. Fred supposedly spent a year in a hip-high cast until he recovered and could walk again.

Fred was sure to tell the commenters on his story that he was “pulling [their] leg.” We might never know for sure what happened to Fred’s leg, but we’d like to believe the alligator story.

He added a little disclaimer that read, “The REAL story doesn’t matter. The important message is ‘How you deal with life’s adversities!’” And Dakota Fred is living up to his words.

Also Read: Everything You Need to Know about Misty Raney from Homestead Rescue