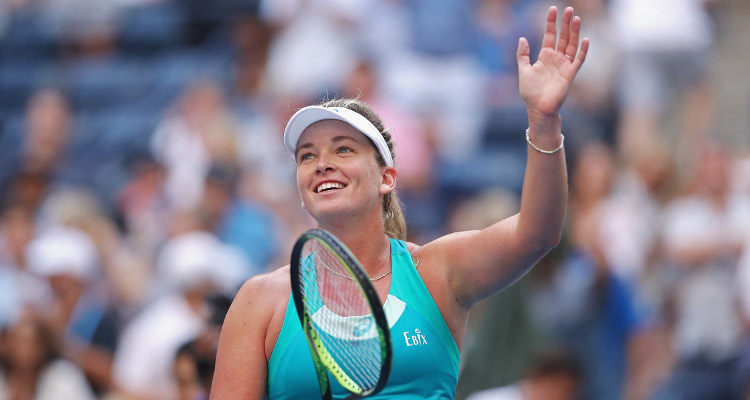 Coco Vandeweghe is edging her way up in the U.S. Open Tennis Championships 2017. She reached the quarter-finals for the first time in her pro career and has what it takes to win the tournament. But first, she has to get past No.1 seed, Karolina Pliskova in the quarter-finals.

A young woman by the name of Coco Vandeweghe came out of nowhere and took the WTA by storm! Known for her aggressive game play, she gained international fame after making it to the 2017 Australian Open semi-finals. Now, she has made it to the U.S. Open quarter-finals for the first time. This rising tennis dynamo has been gaining attention, prompting people to ask about her life outside the court. Is Coco Vandeweghe married? Or is she dating someone? We’ve got the lowdown on her romantic life and more, right here in our Coco Vandeweghe wiki.

The 25-year-old doesn’t know the meaning of rest! She’s pushed herself in every tournament, fighting for qualifying wins since the beginning of her career. Her hard work has been paying off but she won’t slack off. Vandeweghe’s drive to do better comes from her family.

This New York-born player has an elite sports pedigree. Her mother, Tauna Vandeweghe, was an Olympic swimmer. Tauna’s father was Ernie Vandeweghe, a former player for the New York Knicks, and an NBA star in his prime.

If that’s not all, Tauna’s uncle is Mel Hutchins who also played for the Knicks! Coco’s uncle (Tauna’s brother) Kiki Vandeweghe, also played in the NBA before serving as a coach and is now VP of basketball operations in the league. Tauna has a son, Beau, from her previous marriage, and he is also a professional volleyball player. Talk about athletics running in her blood! Coco struggled with living up to the family name but she finds growing up in a competitive household advantageous.

#2. She’s Named After Her Grandmother

Born Colleen “Coco” Vandeweghe, she was named after Tauna’s mother, Colleen Kay Hutchins. Unlike her NBA brother, Mel and the rest of the family, Colleen Hutchins wasn’t into sports. The homecoming queen was crowned Miss Utah and Miss America in 1951. Coco said her grandmother taught her how to “conduct yourself” and groomed her to cope with the spotlight that came with a tennis career.

Coco was born from her mother’s second marriage to Robert Mullarkey. There’s not much known about Mullarkey, except that he is estranged from Coco. The tennis pro hasn’t spoken to her father since she was 16 and has adopted her mother’s maiden name, Vandeweghe.

Being from a family of famous sportspeople, they have all taken to using nicknames in day-to-day life. So, Colleen goes by the name Coco, while her younger siblings go by Crash and Honnie. “We all have very interesting names. I have always enjoyed Coco,” said the athlete adding, “except in my early school years when people were teasing me [with] Coco Pebbles and Coco Puffs and all that sort of stuff; that definitely bugs me. But I love my name.”

Happy Fathers Day to my grandfather who was the best dad I could of ever had! Miss you! #HappyFathersDay ❤️

Many wonder about the young and beautiful player’s romantic life, but she is so dedicated to tennis that she has no time for dating! There were brief rumors that Coco Vandeweghe was a lesbian, but they were unfounded. At the moment, this girl’s true love is tennis!

With the strongest serve on the tour, she first gained attention when she won the 2008 U.S. Open girls’ singles as a junior without dropping a set! Her WTA career started slow but she rose in the ranks with her maiden Grand Slam in 2015’s Australian Open. 2017 has been her best year yet. She cruised all the way to the semi-finals of the Australian Open. It was during this tournament that she went up against her first No.1 opponent, Angelique Kerber. She not only defeated Kerber in a major upset, but did it in style, winning straight sets!

Also Read: Juan Martin Del Potro’s Girlfriend in 2017: Who Is He Dating?

She’s moved up in rank from No. 45 to No. 22 and with her performance in the U.S. Open so far, she’s now ranked at No. 20. In the previous Opens, Vandeweghe didn’t get past the second round. Needless to say, it’s a big deal for her to be one of three American players with Venus Williams and Sloane Stephens to make it so far. Vandeweghe may move up in the ranks if she defeats current No.1 seed, Karolina Pliskova in the quarter-finals on September 6. With so much to do, romance is likely the last thing on Coco Vandeweghe’s mind!