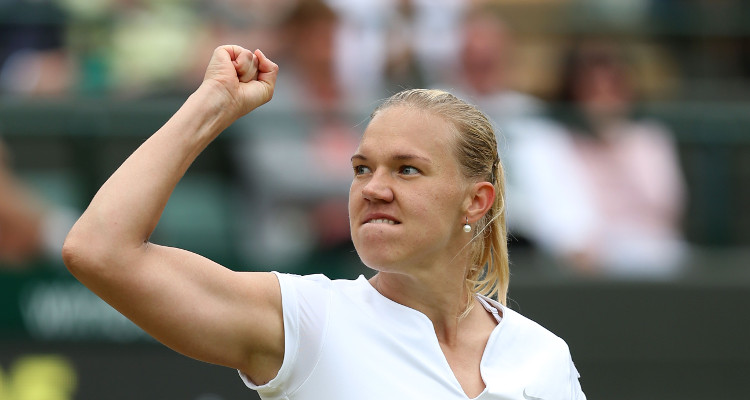 Kaia Kanepi has had a dream run so far at the U.S. Open Championship 2017, one that she and her fans hope will continue. She has reached the quarterfinals where she will be facing Madison Keys, a great player who will have the home crowd’s support. Kanepi is back after recovering from injuries and will have to play hard to reach the semifinals. We’ve got all you need to know about her, right here.

Tennis player Kaia Kanepi did something that hasn’t been done in the last 36 years. Even though she is ranked 418th in the world, she made it to the U.S. Open 2017 quarterfinals, despite being off the professional tennis circuit for the better part of two years. Due to a series of health related issues, Kenepi has been kept off the court, but now, she’s back with a vengeance! Kanepi is overjoyed at her achievement of making it to the 2017 U.S. Open saying, “I’m just very proud to be that far and to be able to play those important matches again.” The U.S. Open is the first Grand Slam tournament that Kanepi has participated in since 2015. She could not play professional tennis because of problems with the soles of both feet and a virus infection that precedes mononucleosis. Where is Kaia Kanepi from? Who is she dating? We have all the answers you need, right here in our Kaia Kanepi wiki.

Born on June 10, 1985, in Haapsalu, Estonia to Anne and Jaak Kanepi, Kaia Kanepi’s age is 32. She developed an avid interest in tennis at a young age, as both her parents were tennis players. Kanepi watched her parents and two sisters play tennis and took up the sport at the age of eight. She reached the No. 1 spot on the junior rankings before turning professional in 2000. Thanks to her height of 5’11”, Kanepi was ideally suited for tennis and could cover the court faster than most of her opponents.

Not to Be Taken Lightly

Hi. This my first ever #instagram post. I had a photoshoot with Miami based Estonian photographer @reilynomm and here is one making of pic. I really cannot wait to see the results. Follow me on instagram/kaiakanepi

Kanepi soon climbed up the professional tennis rankings and became a major threat to top seeded players. She beat higher ranked players like Anna Chakvetadze, Kimiko Date, Flavia Pennetta, Andrea Petkovic, Caroline Wozniacki, and Madison Keys. Kanepi was ranked with the top 100 in women’s tennis and reached the quarterfinals of several Grand Slam tournaments, including the French Open, Wimbledon, and the U.S. Open. She is known for her fast serve and her powerful strokes that send her opponents scurrying to the corners of the court. With a new coach guiding her, Kanepi is working hard to improve her skills. Now that she has recovered from her injuries and is all set to reclaim her place at the forefront of women’s tennis, her opponents better watch out!

There is no information on Kaia Kanepi’s net worth, but considering that she has been playing for years and is finally gaining some real recognition on the court, it’s likely Kanepi could see an increase in wealth, as well as a few sponsorships. Details about Kaia Kanepi’s boyfriend are also unknown, so we do not know if she is seeing anyone. One look at Kaia Kanepi’s Instagram account tells us that she has worked very hard on her fitness over the last couple of years. There are pictures of her working out at the gym, playing, and practicing to regain her form. There are also pictures of her with her family and friends going out or just hanging around. Kanepi now faces Madison Keys in the U.S. Open 2017 quarterfinals, and everybody is expecting a tough and evenly matched game. The Kaia Kanepi vs. Madison Keys match has generated a lot of interest among tennis fans, who are eager to see how far can Kanepi go on her comeback run. The match is scheduled at 7:00 p.m. EST on Wednesday, September 6, 2017, so don’t miss it!