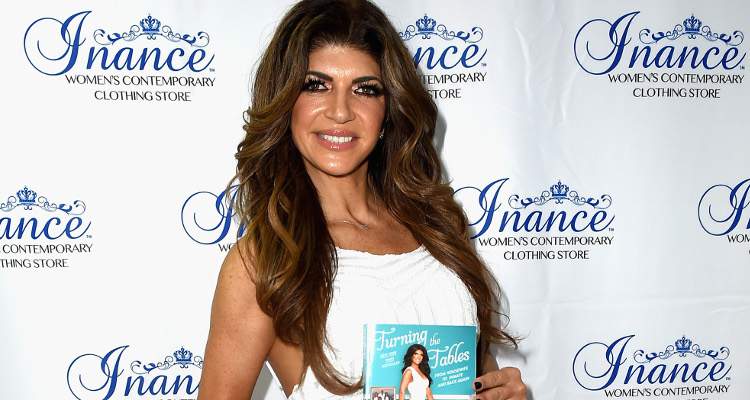 We all know by now that the cast on Bravo’s The Real Housewives of New Jersey get salaries equal to the drama they create. Teresa Giudice makes a pretty penny from her books and her appearances on RHONJ, however, her estimated net worth in 2018 is -$11.0 million. She has seen her fair share of problems, both on and off the show. The bestselling cookbook author and her husband are infamous for their legal and financial ups and downs. She has shot down rumors that she’s divorcing her husband, Joe. Nevertheless, people wonder if a purported divorce and prison sentence could further decrease her net worth.

Born Teresa Gorga on May 18, 1972, this Bravolebrity is 46 years old. Her parents were Italian immigrant parents who lived in New Jersey.

Teresa studied fashion marketing at Berkeley College and used to work as an associate buyer for Macy’s. But she found her true calling on reality TV.

The bodybuilding queen is the only remaining original cast member of The Real Housewives of New Jersey since the show began in 2009. Her brother, Joe Gorga, and his wife, Melissa Gorga, also star on the show.

Teresa Giudice’s salary details are largely unknown. But in her initial bankruptcy filing, she stated that she earned $3,333 a month from Bravo.

However, certain details about her income from RHONJ where revealed in 2016 during her legal proceedings. She earned roughly $7,000 a month as a reality star, according to reports.
Her RHONJ salary per season went from $700,000 before she served her prison time to $1.0 million after her release. And if we factor in the $250,000 for her “goodbye” interview and $350,000 post-prison interview Bravo paid her, Teresa ranks among the highest paid housewives of the franchise.

Teresa also appeared in season 5 of The Celebrity Apprentice and raised $70,000 for her charity.

Joe owned multiple businesses at one time. He ran a construction company, a laundromat, and a pizza restaurant.

It’s pretty clear from RHONJ that the Giudices lived well beyond their means. They led an extravagant lifestyle, which came to an abrupt halt when they went bankrupt.

They filed for chapter 7 bankruptcy in 2009, claiming their annual income was $79,000 from their business ventures. Teresa was listed as unemployed back then.

The couple tried to auction the furniture from their New Jersey home but put it off when they withdrew their initial bankruptcy petition.

Teresa and Joe Giudice were deep in debt in 2011 and declared bankruptcy. They claimed they were $11.0 million in debt in their bankcruptcy filing.

Joe’s past run-ins with the law also mounted their legal troubles. He was charged with failure to file tax returns between 2004 and 2008, a period where he reportedly earned $1.0 million.

In 2013, the Giudices were charged with conspiracy to commit mail fraud, wire fraud, and bank fraud for falsifying information on loan applications.

They owed a lot to their creditors, too. The Giudices reportedly raked in $104,000 in unpaid credit card bills. They also owed $91,000 for the mansion that featured on RHONJ season 1. Additionally, they owed $2,300 in unpaid phone bills.

They were accused of financial fraud, which disclosed they had earned around $5.0 million over a decade. The Giudices entered a plea deal with federal prosecutors in March 2014.

Teresa was sentenced to 15 months in prison whereas her husband was sentenced to 41 months. They were allowed to serve their sentences separately so that one parent remains with the children.

The Feds also took Teresa’s Maserati, household furnishings, and rent from a property.

Previously accused of not disclosing her Bravo earnings, exactly 25% of her RHONJ salary now goes to the government. However, the exact status of her financial health is sketchy.

In a legal malpractice suit she filed against her bankruptcy lawyer, it was revealed that the Giudices had transferred around $100,000 from their bank accounts months before filing for bankruptcy.

Her company, TG Fabulicious, reportedly had deposits totaling over $190,000 soon after the bankruptcy declaration.

According to some sources, she received around $10,000 a month as financial assistance from her relatives in 2013.

Also Read: Margaret Josephs’ Wiki: How Does the “RHONJ” Newbie Rank after Her Debut Season?

She Bounced Back from Her Legal Troubles

The reality star made the best of her fame to recover from her financial troubles. Not only is she making a pretty penny on RHONJ, but she’s also become a New York Times bestselling author.

She has published cookbooks like Skinny Italian: Eat It and Enjoy It – Live La Bella Vita and Look Great, Too! (2010), Fabulicious!: Teresa’s Italian Family Cookbook (2011), and Fabulicious!: Fast & Fit (2012). The recipes featured in her books were passed down from her mother, Antonia Gorga, who passed away in March 2017.

She turned her time in prison into a memoir, Turning the Tables: From Housewife to Inmate and Back Again. She released her sixth book, Standing Strong, in October 2017.

In her legal proceedings, it was mentioned that she negotiated a deal for Skinny Italian that would see her get paid $250,000 in advance. The deal also included an extra payment of $30,000 and royalties, depending on Teresa Giudice’s book’s sales.

Like most of the Real Housewives, Teresa has diversified her career by launching a variety of businesses, which were inspired by her Italian heritage.

Together with her brother, Joe Gorga and his wife, Melissa, Teresa opened a restaurant named Gorga’s Homemade Pasta & Pizza in East Hanover, New Jersey. The restaurant closed earlier this year after less than a year opening due to a combination of management issues and demand that exceeded the ability of the small location, according to Melissa Gorga. However, the trio are looking into reopening the restaurant at a bigger location.

She also has some hefty earnings through endorsements. She earns anywhere between $2,000 to $3,400 per post in Instagram endorsements.

She Denies That She’s Broke

Ever since staging the resurgence of a lifetime, Teresa Giudice is hitting back at her naysayers. She has refuted claims that she is “flat broke” and can’t afford her daughters’ tuition.

Here’s how Teresa Giudice’s net worth compares to her castmates: