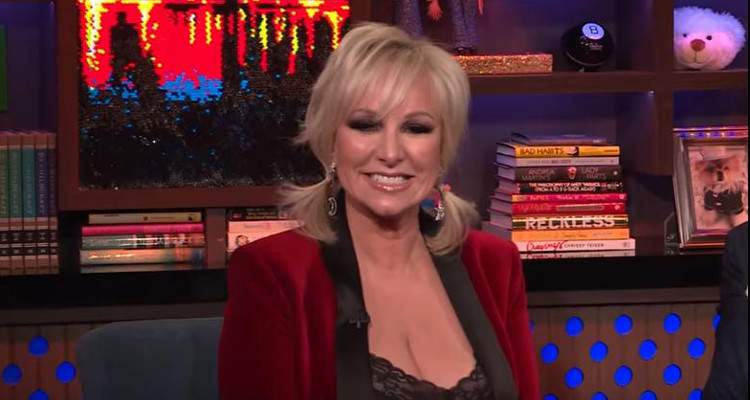 The Real Housewives of New Jersey may be over for now, but Bravo still treated us to the season 8 reunion special. The Reunion Secrets Revealed aired last night (January 31) and spilled way too much information. But, it was also somewhat sweet!

The newbie of the Bravo franchise, Margaret Josephs (with her trademark pigtails) witnessed Danielle Staub’s proposal. And, it was emotional! But, did she deliver the goods this season?

Get the lowdown on Margaret Josephs, right here!

Born on April 9, 1967, in New Jersey, Margaret Josephs age is 50. She graduated from the Fashion Insititute of Technology with a degree in fashion design.

Josephs started out as a dress designer in Manhattan’s Garment District. The prints and fabrics there greatly inspired and influenced her and she launched her own line of decoupage home accessories.

The success of the line led Josephs to launch her lifestyle brand, the Macbeth Collection in 1998. It expanded to a tech, clothing, and fashion accessories business. Her first major order was worth $40,000 in 2000 and business exploded from there.

The Macbeth Collection is sold in stores like Walmart, Barnes & Noble, Bed, Bath & Beyond, and Nordstrom. It was reported that Josephs’ company earned $1.0 million in sales in 2002, and by 2012, it made an estimated $26.0 million.

It’s GREAT to be back for @cta and #CES2018 with @macbethcollection and new partner iWorld! Our #fabulous little booth is so #chic. #proud #MacbethCollection #Vegas #RHONJ ???❤️

Margaret Josephs started working on her business while being a stay-at-home mom. Her son was born in 1996, and when he was a toddler, she’d buy buckets and trays from Home Depot, decorate them, and re-sell them to a local store.

At that time, Josephs was married to her first husband, Jan Josephs, who is 20 years her senior. He had three children from a previous marriage.

Margaret Josephs took care of her stepchildren and son while working from home. Her first batch of decorated metal buckets sold out in just two days!

From there, Josephs expanded to trays and home accessories. Her products created such a high demand that she recruited her nanny and others from the neighborhood to help out.

Josephs said she made juggling work and being a mom possible because “women are amazing multitaskers.” Her son agrees and calls her “Rock & Roll Martha Stewart.”

#HappyMonday and welcome back to real life!! ? Good luck with work, with school, with traffic, and with your favorite nemesis. ? If it helps relieve some stress, do some #Christmas shopping at #MacbethCollection, and use code CYBER30 for 30% OFF everything on the @macbethcollection site. ? See? Can’t ever say I didn’t do something for you in a time of need — on a Monday. ???❤️ #CyberMonday #sale #RHONJ

She Eloped with Her Second Husband

According to her Bravo bio, Margaret Josephs moved to Tenafly, New Jersey, with her first husband, Jan Josephs to raise his three children. After 17 years together, the couple divorced but remain on good terms.

The 50-year-old showed off her relationship with her ex on an episode RHONJ. She said they are “much better friends than a couple.”

Margaret Josephs then fell in love with Joe Benigno, “the ultimate motorcycle riding plumber and contractor” she nicknamed “Super Joe.” They eloped in 2013 and have been together ever since.

However, Josephs’ children weren’t happy that she left their father for Benigno. And although she’s on good terms with her ex, she is estranged from her stepchildren.

Josephs’ 21-year-old son still contacts his half-siblings, but she hasn’t spoken to them for a long time. But she hopes for reconciliation.

Back in 2014, the RHONJ newcomer was sued for millions. The clothing company, Vineyard Vines, sued the Macbeth Collection to the tune of $12.0 million for trademark infringement.

The court ruled in favor of Vineyard Vines, and Josephs was ordered to pay $300,000 in damages. But, it doesn’t end there.

“Margaret didn’t abide by the ruling,” said Todd Sharinn, Vineyard Vines’ lawyer. “I’ve seen some of her banking records… she lives a pretty good life, obviously good enough to get on RHONJ.”

The case is still ongoing, and Vineyard Vines is now demanding $9.4 million in damages!

Margaret Josephs’ lawsuit is not the last of her problems. Josephs and Benigno were also slapped with a foreclosure notice for their $1.125 million mansion!

Margaret Joseph’s house drummed up drama between her and now former castmate, Siggy Flicker. And now, we wonder if her legal problems could lead to more drama in the next season of RHONJ! Tune in next season to find out!