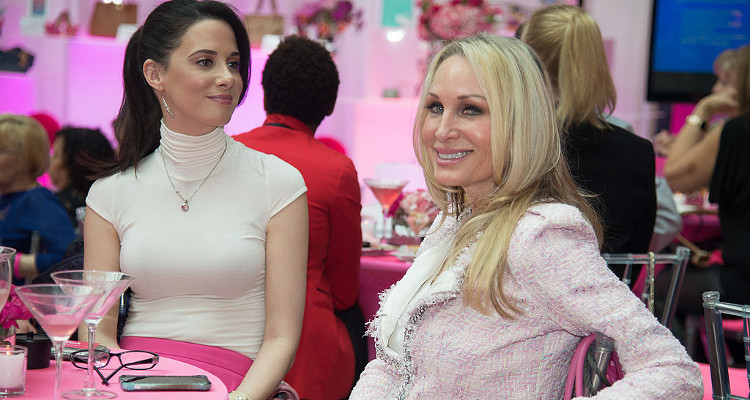 Kim DePaola may have only been a “friend” of the Real Housewives of New Jersey, but she’s no background character. After stirring the pot on the show, she’s having some off-camera troubles.

Real Housewives of New Jersey alum, Kim DePaola has a penchant for creating trouble among the leading ladies of the show. But little did she know she’d have troubles of her own off camera. Over the weekend, it was revealed that the reality star is linked to a double-murder investigation! What happened and how is DePaola connected to the murder? We’ve got all the details on that and more in our Kim DePaola wiki.

The Ladies Love Shopping at Her Store

Kim DePaola (a.k.a. Kim D) isn’t one of the Jersey gals, but she’s definitely a part of their circle. She is the sole owner and proprietor of the boutique, Posche in New Jersey. The store sells high-end clothing, handbags, shoes, and jewelry for wealthy women in the New Jersey suburbs. In other words, she has been draping the Housewives in sparkles and leopard print for years! Posche has served as a meeting ground for the Housewives several times on the show. She’s also had fashion shows featured on RHONJ.

It must be a thriving business because DePaola has a net worth of $500,000. Since she’s only a friend of the cast, she doesn’t get a regular paycheck from Bravo, she only gets paid for the episodes she appears in. So, if she were a regular cast member, she’d have a much higher net worth. But at least her store gets plenty of publicity, and DePaola knows very well how to cash in on being a “friend.”

A Resumé Full of Mischief

To make sure they appear on TV along with the fixed cast members, friends of the Housewives tend to stir up trouble. From the first time she appeared on the New Jersey franchise, Kim DePaola cozied up to former Housewife, Danielle Staub and disavowed her friendship with the other ladies. Her fashion shows set the stage for drama, including one which had Teresa Giudice chasing Staub through the venue.

She then made an archenemy of Melissa Gorga, when DePaola invited a mystery man to her fashion show. The man had was connected to Gorga’s past and claimed she used to be a stripper. DePaola orchestrated another Housewives meet, where Gorga’s friend claimed she cheated on her husband, Joe Gorga.

DePaola certainly made the most of her time on RHONJ. Even though she didn’t return for the sixth season, she still haunts the New Jersey suburbs. Though she claims the show was a stepping stone for her, Kim D is making use of her reality TV fame. She’s got a book proposal based on a true story (not her own) and is hoping to sell it for a TV adaptation. In the meantime, she continues to make guest appearances now and then.

She’s Related to Another Kim

No, we’re not talking about Kim K, but drama follows you everywhere if you have the famous name. Kim D is related to another Jersey Housewives’ friend, Kim Granatell, better known by as Kim G. The two are actually sister-in-laws, and while they’re not related by blood, they might as well be.

Both, Kim D and Kim G have been causing drama on RHONJ. Granatell added fuel to the fire that was Danielle Staub and had a dramatic end to their friendship later on in the series. Kim G later left the show to fix her marital troubles. But her husband (Kim D’s brother) divorced her anyway. She briefly dated Michael Lohan, Lindsay Lohan’s dad, before he married his current wife, Kate Major.

Like her age, Kim DePaola’s husband isn’t known. She has a son named Chris from a previous relationship. After her exit from RHONJ, her most famous boyfriend was Thomas Giacomaro, New Jersey’s “King of Con.” The convict spent 13 years in jail for scamming almost $73.0 million out of 200 investors, including a few celebs and the mob. He also tried to rake in millions with a movie deal by turning his life of crime into a big screen adaptation.

Apparently, DePaola helped turn Giacomaro into a pop-culture icon. She reportedly helped secure his book, movie, and TV show deals and he’s in the middle of writing a book with the help of his co-author, Natasha Stoynoff. Whether they are still together is not known.

The Center of a Murder Investigation

This past weekend took a horrifying turn for Kim D, when she found her car linked to a double-murder investigation! The details are still obscure, but from what has been revealed, an Audi owned by Kim D was found burnt in Paterson, New Jersey with two charred bodies inside.

The two unidentified bodies had bullet holes in their heads, as they were allegedly shot execution-style, before burned in the vehicle that is registered to DePaola. According to reports, her son Chris was taken to the airport by his friend, Aaron Anderson. The 27-year-old was out of town when the incident occurred, but said that Anderson wasn’t supposed to drive the car in his absence.

People nearby had heard two gunshots before seeing the car go up in flames. Firefighters had to cut the car’s roof to pull out the victims. The bodies were torched to the point that they can’t be identified at this time. Dental records are being processed to discover the identities, as at this time, authorities only know that they are both male. A matter of concern is that neither Anderson’s parents nor Chris have been able to get in touch with Aaron.

When reports of the double-murder investigation surfaced, fans were naturally concerned. DePaola took to Instagram to assure them that she and her son are okay, and sent her condolences to the victims’ families.

Thank you to everyone for your support!!!!