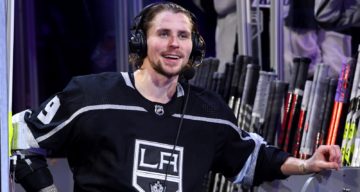 Adrian Kempe #9 of the Los Angeles Kings speaks to the media after their victory against the Chicago Blackhawks at Crypto.com Arena on April 21, 2022 in Los Angeles, California. (Photo by Juan Ocampo/NHLI via Getty Images)

Adrian Kempe is enjoying his breakout year with the Los Angeles Kings in the 2021-22 NHL season. It is bringing a lot of attention to his personal life, too. Kings fans especially want to know more about Adrian Kempe’s girlfriend. Sian Nickson, a fashion model, has been turning heads on social media and in hockey circles for a while now. While we do get some glimpses of their relationship on her social media, it’s nearly not enough to satiate fans’ curiosity. So we reveal more about this NFL WAG’s background in Sian Nickson’s wiki.

Sian Nickson was born on March 18, 1996, and hails from Toronto, Canada. She is one of three children born to Michele House and Steve Nickson.

Sian and her siblings attended Donald A. Wilson Secondary School. She went on to study fashion and was enrolled in the Fashion Business Industry Program at George Brown College from 2016 to 2018.

Nickson was already pursuing a modelling career before her post-secondary education. She was first signed with Elite Model Management in Toronto in 2010. She also worked briefly as a sales associate with Aritzia before going to college.

She signed with Meraki Models & Talent in Los Angeles in 2016 and Mannequin Studio in Singapore in 2018. She’s also been a model with the Plutino Group since 2015.