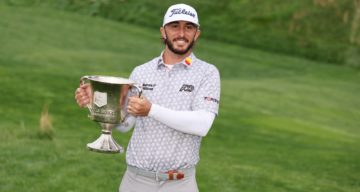 Max Homa of the United States celebrates with the trophy after winning during the final round of the Wells Fargo Championship at TPC Potomac at Avenel Farm on May 08, 2022 in Potomac, Maryland. (Photo by Gregory Shamus/Getty Images)

Max Homa won the Wells Fargo Championship for the second time in his career this month. and great things are also happening in his personal life. The PGA Tour golfer is going to be a dad! Max Homa’s wife, Lacey Croom (now Lacey Homa), makes the occasional appearance on his social media and at the course. From the little glimpses Homa gives, his social media followers are in awe of their relationship. They are, however, curious about the mom-to-be’s background and want to know more about her. So we’ll reveal all the details in this Lacey Croom wiki.

Born on April 16, 1991, Lacey Croom is a native of California. Her family is based in Murietta, in southwestern Riverside County.

She is the daughter of Ellen and Keith Croom. Lacey has at least two siblings.

Lacey Croom graduated from California State University, Fullerton with a BA in communications in 2013. She is a licensed real estate agent and appraiser based in California.

Croom’s parents have operated Croom Appraisal Services in Murietta since 2004. She has been a residential appraiser there since 2016.

Lacey Croom is private on social media, but she does feature on Max Homa’s Instagram often. The golfer gives a lot of insight into their relationship.

The couple has been together at least since 2013, the year Homa went pro. Six years later, they tied the knot on November 30, 2019.

Homa revealed on Instagram in April that he and Croom are expecting their first child together. They had a gender reveal and found out they are having a boy.