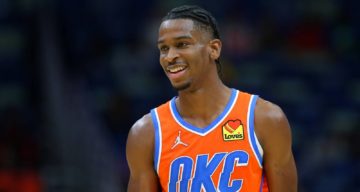 Shai Gilgeous-Alexander at the Smoothie King Center on November 10, 2021 in New Orleans, Louisiana.

An ankle injury has benched Shai Gilgeous-Alexander for the rest of the current NBA season. Now fans are also looking at who the Oklahoma Thunder point guard’s closest supporters are helping him through this setback. Among them is Shai Gilgeous-Alexander’s girlfriend, Hailey Summers. She is well aware of the physical demands of an athletic life and she knows firsthand about Shai’s hard work, as they’ve been together long before he was a professional basketball player. Fans ask who Shai’s girlfriend is. So, we deep dive into her background in this Hailey Summers wiki.

Hailey Summers was born on October 22, 1999, and hails from Canada. Her family is originally based in Hamilton in Ontario.

She is one of three children born to Ron Summers and Carolyn Oliver. She has a sister, Taylor Summers, and a brother, Will Summers.

Her father, Ron, is a retired firefighter. He was one of three full-time Black firefighters in the Hamilton fire department where he spent three decades.

A student-athlete herself, Hailey Summers played soccer and basketball. She was a standout soccer player at St. Mary Catholic Secondary School in her hometown. She led her team in 11 Ontario Championships and caught the eye of the NCAA.

She accepted a full-ride scholarship to the University at Albany in New York. She majored in psychology when she moved to the U.S. in 2017.

She was part of Albany’s soccer team roster from 2017 to 2021. She even served as the team captain in the 2019 and 2021 seasons besides raking in the titles and stats.

Shai Gilgeous-Alexander grew up in Hamilton, Ontario, before transferring to a high school in Tennessee. He joined the University of Kentucky Wildcats basketball team in the 2017-18 season.

The basketball player has been in a relationship with Hailey Summers at least since 2016. She was also one of his supporters when Shai was selected by the Charlotte Hornets in the 2018 NBA draft before being traded to the Los Angeles Clippers the same day.