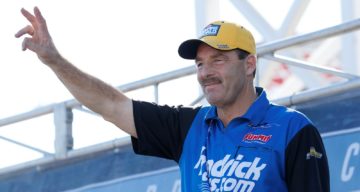 Greg Anderson became a five-time Camping World NHRA Series Pro Stock champion on November 14, 2021. Anderson and his team aren’t the only ones celebrating this milestone of the most wins in Pro Stock history. So is the special person in the drag racer’s life. Greg Anderson’s wife, Kimberly Anderson, has been a mainstay at his races and a recognizable presence in the NHRA scene. However, there’s very little known about who Kimberly Anderson is. We reveal more about her background right here in this Kimberly Anderson wiki.

Born Kimberly Renee Humphrey on June 13, 1970, she hails from Jacksonville, North Carolina. She graduated from White Oak High School in 1989.

Kimberly is the youngest of three children born to William Troy Humphrey and Myrtle Frances Humphrey. While her mother, Frances, was a restaurateur, her father, William Sr. had a roofing and heating business that her siblings are now part of.

Frances passed away in 2018. She is survived by her husband William Sr.; her children, William Humphrey Jr., Wanda Flud, and Kimberly Anderson; their respective spouses and children; and extended family.

Kimberly Anderson was previously in a relationship with one Steven Michael Kellum. They have a daughter, Brittany Kellum, who was born in 1990.

After their separation, she met drag racer Greg Anderson and they married on August 9, 1997. Kimberly and Greg Anderson’s son, Cody Anderson, was born on August 24, 1998.