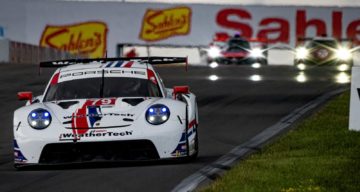 Katie Kearney is a model, golfer, journalist, and social media starlet. And she’s also dating race car pro Cooper MacNeil. Her name might be familiar to sports fans, especially those who follow Bob Menery. The comedic sportscaster previously dated the multi-faceted model, but their relationship ended sometime ago. Now that MacNeil has the gorgeous arm candy at his races, fans everywhere are asking, who is Cooper MacNeil’s girlfriend? We reveal more about Katie Kearney and her background here.

Katie Kearney was born on July 5, 1988, and hails from St. Louis, Missouri. She is currently based in Chicago, Illinois, and has traveled the world.

Katie is the daughter of Tim Kearney, a name that might be familiar to older football fans. Tim is a former linebacker from Michigan. After the Dallas Cowboys selected him in the 1972 NFL Draft, he played for Green Bay, Cincinnati, Kansas City, Tampa Bay, and St. Louis from 1972 to 1981.

The former cheerleader from Lafayette High School won the title of Miss Missouri in 2011. She was majoring in communications at St. Louis University at that time.

Katie Kearney inherited her dad’s knowledge of football, but it was golf she loved playing. She now reports, hosts, and writes on golf events and tournaments, as well as travel and fashion, besides modeling.

Modeling was her first job, being scouted and signed at only 14. After she won Miss Missouri and deferred a semester to fulfill her duties, her parents insisted she go back to school and complete her degree in journalism.

She returned to modeling soon after, traveling to Greece, Milan, Stockholm, South Africa, and more and featuring in magazines like Maxim.

While she was working in South Africa, she began playing golf again.

She played at charity golf tournaments, which earned her a partnership with Callaway. She doesn’t play professionally, but hosts PGA events and edits for golf publications. At the same time, she’s running her own swimwear company, Strings Swimwear.

Sportscaster, comedian, and viral social media star Bob Menery revealed in 2019 that he was dating Katie Kearney. However, they broke up on the downlow.

Some publications claim that Menery and Kearney are still dating, which is false. While it doesn’t appear that Menery is dating anyone new, Kearney has moved on with Cooper MacNeil.

Illinois native MacNeil is a race car driver competing under WeatherTech. They’ve had a few appearances on each other’s Instagram pages, and Kearney has even been in attendance at MacNeil’s races. Many fans, however, have yet to notice that the Porsche 911 driver is taken.