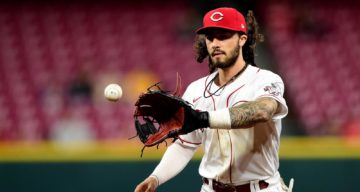 Jonathan India was named NL Rookie of the Year, becoming the first Cincinnati Reds rookie to win the title since 1999. And it’s not just the second baseman’s fans and Cincinnati celebrating the title. Jonathan India’s girlfriend, Daniella Garcia, is someone his social media followers are familiar with. She is often cheering him on at games and traveling to wherever his career takes him. However, there’s very little known about who Daniella Garcia is. It provokes a little curiosity about her background among their combined social media followers. So we reveal all there is to know about this Reds WAG in Daniella Garcia’s wiki.

Daniella Garcia Padron was born on May 8, 1997. She is a native of Fort Lauderdale, Florida, and is of Venezuelan descent.

Daniella is the older of two daughters born to Annabella Garcia Padron and Gustavo Garcia. Daniella and sister Alexandra Garcia’s mother Annabella is from Caracas, Venezuela. Their father Gustavo also studied in Venezuela.

Gustavo is a licensed realtor based in Miami. He is an equestrian enthusiast and shares his passion for horse riding with Daniella, who frequented the Parkland Equestrian Center.

Fort Lauderdale native Jonathan India was selected by the Cincinnati Reds in the 2018 MLB draft. In 2019, he was playing in the Florida State League with the minor league team the Daytona Tortugas.

Later that year, the infielder made his relationship with Daniella Garcia Instagram official with a November 2019 post. Garcia followed it up with a post celebrating India’s birthday on December 15.

They are a jet-setting couple, with Garcia traveling with India to Reds away games. He often features on her Instagram, and from the comments under her posts, it appears her family adores him, too.