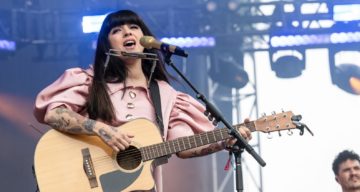 Norma Monserrat Bustamante Laferte is better known as the Chilean songstress and visual artist Mon Laferte. And she pulled a Beyonce by flaunting her baby bump during her performance at the 2021 Latin Grammy Awards. And her fans are eager to know who Mon Laferte’s boyfriend or husband is. Joel Orta has had a few appearances on this inspiring singer’s social media, and her followers can’t get enough. They often ask who Joel Orta is and about his background, which we reveal here.

Joel Orta Oviedo, who celebrates his birthday on August 13, hails from Tuxtla Gutiérrez, Chiapas, in Mexico. He is currently based in Mexico City.

Very little is known about his early life. Based on some of his Facebook posts, it appears he grew up in a large family with at least five siblings.

Joel Oviedo, who also goes by Joel Orta, is a musician and guitarist. He performs with the band Celofán in Mexico. He is also associated with the local network Telehit Música.

Orta is a singer-songwriter and sound engineer, affiliated with the music production studio Noise Room in Mexico City. He is also a production manager for Mon Laferte.

Besides serving as a recording assistant, Orta has provided vocal editing and additional sounds for Laferte’s 2021 album, 1940 Carmen.

According to her Instagram activity, Mon Laferte has been dating the recording engineer Joel Orta at least since late 2020. They have, however, worked together on her albums since 2017.

Orta and Laferte are expecting their first child together. While the singer and visual artist has been showing off her pregnancy to her Instagram followers for weeks, her baby bump made its red carpet debut at the 2021 Latin Grammys.