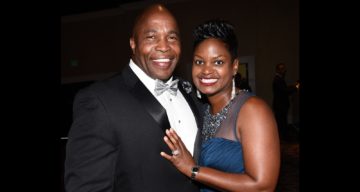 An off-duty Texas sheriff’s deputy, Renard Spivey, has been charged with murder in the July 28 fatal shooting of his wife, Patricia Spivey. Viewers of Justice for All with Judge Cristina Perez might find Spivey familiar. The now-disgraced deputy was the bailiff in Judge Cristina Perez’s reality TV courtroom. Read all about what happened with Renard Spivey here.

Renard Leon Spivey was born on July 20, 1956. He joined the Harris County Sheriff’s Office in Texas as a detention officer in 1996 and became a deputy in 1998.

According to local news outlets, he spent his entire career in detention command and has been in court operations since 2016.

Reality TV watchers became familiar with Spivey when he appeared on Justice for All with Judge Cristina Perez. He was the bailiff on the show from 2012 to 2016. He also had a brief appearance on Cristina’s Court.

@SheriffEd_HCSO can you confirm what neighbors are telling us: the @HCSOTexas deputy involved in the overnight deadly shooting is Dep. Renard Spivey who played the bailiff for the TV show “Justice for All” with @judgecristina #KHOU11 pic.twitter.com/ZeNBB5agG0

Also a bodybuilder with weightlifting trophies, he appeared as one in the movie Married Men and Single Women in 2011. He has other minor TV appearances not related to his deputy work.

Spivey Was Married to Patricia Spivey

Renard Spivey was reportedly married previously and has an adult daughter. As part of the divorce agreement, the court ordered Spivey to pay $10,000 to his ex-wife and daughter. His ex had sued him for neglecting their daughter.

Spivey later married a woman named Patricia. At the time of her death, she was 52. She was mother to a daughter, Patrina Marshall.

Patricia graduated from Jack Yates High School. Friends and neighbors who knew her said she was lively and social. Her brother, Ezra Washington, said that she was also a fitness and health enthusiast.

Spivey Allegedly Killed His Wife in an Accidental Shooting

According to court records, Renard and Patricia had an argument over their intimate life at their home on Briscoe Street on Sunday. At around 3:00 a.m., Renard called 911 saying he and his wife had fought over a gun and he accidentally shot her.

Renard said he and Patricia had been arguing all day about their lack of intimacy. During their argument, they allegedly fought over a gun that went off, killing Patricia.

When authorities arrived, Patricia was found dead in the master bedroom closet. Her cellphone and three shell casings were found near her body. A 9-mm handgun was on top of a clothes hamper.

She had bruises on her wrist and two gunshot wounds, one in the arm and another to her heart.

Renard was taken to a nearby hospital for gunshot wound to his leg. He claimed Patricia shot him in the leg during their tussle.

Investigators, however, say his narrative is inconsistent with the circumstances of the incident. They noted that Renard, with his bodybuilder frame, outweighed her easily by 100 pounds.

Renard’s employment with the sheriff’s office is currently under review.

He has been charged with murder and officials have requested a high bail amount be set, considering his experience in law enforcement. Currently, his bail amount has been set to more than $800,000.

While he has no history of domestic violence, court records indicate he may have an unspecified mental illness, which will be determined after an assessment.

Patricia’s brother Washington told authorities that she suspected her husband of being back on steroids as well as cheating on her. Washington had spoken to Renard multiple times before the shooting, giving the deputy relationship advice.

“I should have acted on it and that’s going to eat me up for a long time, forever. But him saying that and then acting on it, I gave him the benefit of the doubt,” said Washington.

Patricia is survived by her daughter, brother, and her 83-year-old father. “She was my cushion when things were hard,” Patrina Marshall said in response to her mother’s tragic death. “(She was) my friend when I needed to vent, my hands when I needed help, but most of all, that woman is my mother.”

Meanwhile, the Harris County Sheriff’s Office released a statement in response. “The Harris County Sheriff’s Office family extends our sincere condolences to the family of Patricia Spivey as they mourn the loss of their loved one,” said Sheriff Ed Gonzalez. “While the facts of this specific case will be determined by a jury, I encourage all victims of domestic violence to seek assistance from law enforcement and others whom they trust. I also ask anyone who suspects a friend or loved one may be the victim of abuse to persist in helping them escape a potentially deadly situation.”

Also Read: Where Is Denise Williams? What Happened in the Mike Williams Murder Case?