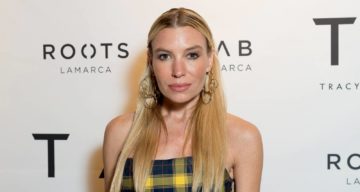 Tracy Anderson announced she secretly wed her longtime beau, Chris Asplundh. The fitness entrepreneur who is behind some of the best bodies in Hollywood has taken a third shot at marriage with her new husband. They’ve kept most of their relationship on the down low, and Asplundh is a relatively private person. He however has a background that can’t go unnoticed. So we reveal all there is to know about Tracy Anderson’s husband in this Chris Asplundh wiki.

Christopher Asplundh Jr. was born on March 17, 1968. If his last name sounds familiar, it is because he is a member of one of the richest families in the country behind the Asplundh Tree Expert Co.

Chris is one of two children born to Christopher Asplundh Sr. and his wife, Ellen Asplundh. His father passed away in 2017 after battling cancer. Besides his wife and son, Christopher Sr. is survived by his daughter Meredith, his grandchildren, his siblings, and extended family.

The Asplundh family had roots in Sweden before they settled in Philadelphia in 1882. Christopher Sr.’s father and uncles founded the family company in tree and vegetation management services. Forbes ranked the Asplundh family at No. 103 among America’s Richest Families in 2015, with the entire family’s net worth estimated at $2.6 billion.

Chris Asplundh Jr. graduated from Marshall University with a bachelor’s degree in business, management, and marketing in 1991. He has been part of the family business since 1993. Asplundh has been the executive vice president of Asplundh Tree Expert Co. for three decades.

A mutual friend reportedly introduced Tracy Anderson and Chris Asplundh in 2018. They’ve been together since then. Asplundh proposed to Anderson at her 45th birthday party in March 2020.

The couple secretly got married in August 2021, and Anderson only revealed the details through a People exclusive and her social media this month. The low-key wedding took place in the New Hope, Pennsylvania, home they share. Anderson’s children and their respective mothers were among the handful of guests.

This is Asplundh’s second marriage and Anderson’s third. The celebrity fitness guru has a son, Sam, with her ex-husband and deceased NBA player, Eric Anderson. She has a daughter, Penelope, with her second husband, the late Matthew Mogol. Anderson was also briefly engaged to hedge fund manager, Nicholas Riley.