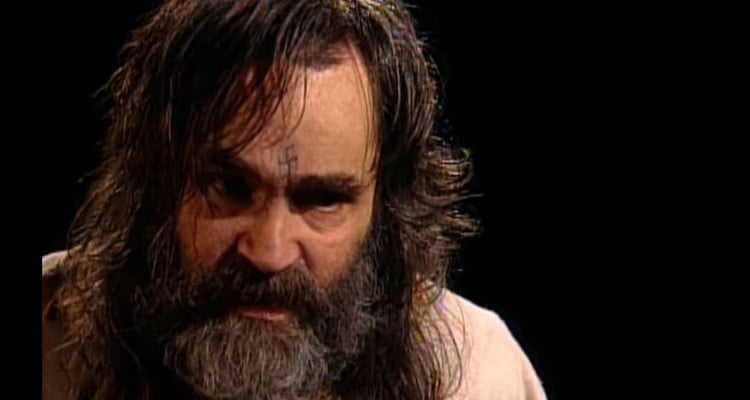 The former cult leader and notorious mass murderer Charles Manson is hospitalized. He is serving life without parole in a California prison, but was wheeled out on a gurney on Wednesday (November 15) to a hospital, and reportedly has one foot in the grave. He was known for a lot of hate, and that’s why people now want to know about Charles Manson’s Swastika tattoo.

The mass murderer and deemed psycho was taken to a hospital after his undisclosed illness got worse, and according to sources, it’s only a matter of time before he passes. If you were wondering why Charles Manson etched a Swastika on his forehead and why he forced his cult members to do the same, then you are in the right place.

Charles Manson (by 2017) has served almost four decades of prison time, but now with the illness, his time may be cut short. But why does Charles Manson have an etched Swastika on his forehead? Keep reading to find out!

What is a Swastika?

To understand why Charles Manson has this symbol on his forehead, we need to understand what the symbol means. A Swastika is a sacred Hindu symbol derived from a Sanskrit word meaning “auspicious” or “well-being.”

However, during the Holocaust and the World War, it widely became known as the “Nazi symbol.” The Germans used the symbol when the Jews became enemies of Nazi Germans, after which the symbol denoted terror and antisemitism.

The Swastika was a part of Charles Manson’s cult and he would have his followers etch an X on their foreheads, too. All the members of the Manson family were on LSD or stronger drugs, and Manson had a very strong hold on each one of them.

They would do as told and this led to all the Charles Manson murders that he was convicted for. Starting with Gary Hinman in 1969, then Sharon Tate, followed by Leno and Rosemary LaBianca, Manson has had his so-called “family” do all the dirty work for him.

The brutality of all the murders, along with being the cult leader, led Manson to prison back in 1971 for seven counts of first-degree murder and one count of attempted murder.

A Symbol of Hate; Glorified by Manson

In an interview, when asked about his Swastika tattoo (and if he was a Nazi), Manson’s creepy thought behind the etch on his forehead proved how his twisted brain worked.

He sported an X mark before the Swastika which was apparently etched daily in the same spot, but his followers still had the X on them when they were all arrested.

Manson had no sense of guilt or even slight remorse for what he had done to his victims, as well as the people who blindly followed him. “I’m a rebel, not a sunny-school teacher.” The convict had said when he was asked if it was okay that his followers were murdering.

It all went down for Manson and his so-called “family” in the late ’60s when they were arrested and put behind bars. But in several interviews conducted in prison, Manson showed neither grief nor guilt for his crimes.

The tattoo he wears became his curse, and now he is said to be taking his last breaths in California alone, as his real family has completely disconnected from him.