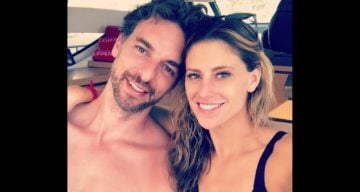 Pau Gasol and his wife, Catherine Gasol, welcomed their first child, Elisabet Gianna Gasol, in September 2020. The two-time NBA champion had a close friendship with his late former teammate, Kobe Bryant, and Bryant’s family. His daughter’s middle name is a tribute to the NBA legend’s daughter, Gianna, who died in the helicopter crash with Kobe earlier this year. Pau and Cat’s tribute to Kobe and Gianna has struck a chord with Black Mamba fans. The six-time NBA All-Star’s relationship is also something awe-worthy, as this Catherine McDonnell Gasol wiki will reveal.

Born Catherine Shay McDonnell on May 22, 1989, she hails from California. She is one of seven children born to Dennis and Celeste McDonnell.

Catherine’s paternal grandfather is the late Philip McDonnell, an illustrious advertising executive. The World War II veteran had a three-decade-long career in journalism and advertising at The Washington Post, The Associated Press, The Baltimore Sun, LIFE magazine, and Time Inc.

He was a famous advertising figure at Time Inc. before he passed away in 2016. He is survived by his children and grandchildren, including Catherine and her parents and siblings.

Cat McDonnell earned her BA in communications and business from the University of Southern California in 2011 and her masters with honors and an emphasis on entertainment law and digital marketing in 2012. While maintaining her GPA at around 3.9, she participated in broadcast journalism and sororities, and also won scholarships.

While she was at USC, Cat built her resume with a variety of work experience. She was an assistant at a San Francisco PR firm, a sales and marketing intern at Showtime, a sports reporter at the Burbank ABC News affiliate, and a journalist at Fox News’ Los Angeles station.

After graduating from USC with a masters in 2012, she was hired by the Innovative Dining Group in West Hollywood. She was a project manager and a social media manager in the two and a half years she was there.

Cat moved to New York where she worked with Guggenheim Partners from 2014 to 2017. Her most notable work involved mentoring children in the Governor’s Committee on Scholastic Achievement (GCSA) program at Guggenheim.

As of 2016, Cat has been the director of communications at the TESS Research Foundation in San Francisco. The charitable organization funds research into citrate transporter disorder (SLC13A5 deficiency), a neurological disorder.

According to the organization’s website, Cat is an aunt to two children who have this disorder. Hence, it is a cause close to her heart.

For me, 2019 has encompassed the highest highs and the lowest lows and I am grateful for it all – all the hard lessons learned and all the beautiful moments had. The highest of highs was marrying my best friend (TWICE), and lowest part involved the regular moves (5 cities in 1 year) and the many surgeries/health problems we both suffered from (and all that comes with those difficult unstable times). Going into 2020 I am especially grateful for all my incredible friends and family! When I was 3 years old I used to say that God let me pick between a big family or being an only child – and I picked the big family (7 kids!) – well if true, wow did I make the right decision – my family is my everything (and they ALL stayed the latest at both our weddings) and were there for me thru all the highs and lows – they are the best and I feel extra lucky (including my new family too)! ❤️ Excited to see what 2020 brings us! ✨

Pau Gasol was playing with the San Antonio Spurs in 2016 when news surfaced he was dating California native Cat McDonnell. Two years into their relationship, the Spaniard announced his engagement to Cat.

Cat and Pau (the cutest couple name ever!) married in 2019 with two weddings. Their first wedding on July 7 was in San Francisco. Days later, they had a second wedding ceremony in Spain’s Ampurdan region. Their dream weddings were fulfilled by celebrity wedding planner Mindy Weiss.

✨ Elisabet Gianna Gasol joined our family on September 10th, 2020 ✨ She made a quick and easy entrance on a VERY special day, her great-grandmother Elizabeth’s 100th birthday and her mom and dad’s 2nd engagement anniversary.💖 We are already so in love with our sweet Ellie!! 💜#GasolFamilyOf3 #girlmom #girldad #EllieGasol

A year after their wedding, Pau announced that he and Cat were expecting their first child together. They welcomed their daughter, Elisabet Gianna Gasol, on September 10.

Little Elisabet’s first name is a tribute to a great-grandmother whose 100th birthday was on the same day. Her middle name is a heartfelt tribute to the late Gianna Bryant, as Kobe and his family were extremely close friends of Pau Gasol.