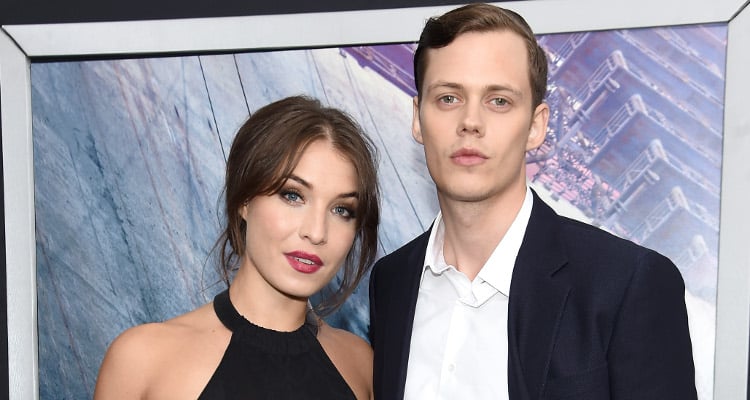 The movie that will make you pale with horror, It, just shook the world! The movie premiered on September 8, 2017, and some critics have even said that it will haunt you for months! The unnerving, spine-chilling clown is played by Bill Skarsgård, and he was spotted with a mystery woman earlier this year. We know who he is dating, and we have the details right here!

Are you looking for the latest on Bill Skarsgård’s girlfriend in 2017? The creepy It clown, Pennywise shed his skin and emerged as the very chiseled Bill Skarsgård. (Truly, it’s a shock to the stud behind the terrifying clown persona!) Anyone can fall for that smile (as long as the clown makeup is off), and one mystery woman seems to have scooped up the man it belongs to! Stellan Skarsgård is more than proud that yet another son of his is all the rage. Here’s Bill Skarsgård’s dating timeline for more about the actor’s love life.

Who is the Handsome Bill Skarsgård?

Before we get into who Bill Skarsgård has dated, let’s take a sneak-peak into who the actor actually is. He came out of nowhere, and is now plastered all over the news, with It making him most famous! Bill Skarsgård was born on August 9, 1990, in Vallingby, Sweden to Stellan Skarsgård and My Sonja Marie Agnes, making his age 27. Two of his seven siblings are half brothers from his father’s second marriage to Megan Everett.

All of Bill’s siblings were either actors (like his father) or doctors (like his mother). According to IMDb, Bill struggled with his decision after working with his father in Arn: The Kingdom at Road’s End. Movies turned out to be a good decision for him after all, and Bill is now a star to watch out for!

Before starring in the hair-raising It, you might have recognized Bill from the third installment of the Divergent series, Allegiant. His more notable role was in Simple Simon, for which he received a Best Actor nomination at the Guldbagge Awards (Swedish annual film awards) in 2011. He also appeared in a number of movies like Behind Blue Skies, The Crown Jewels, Anna Karenina, Victoria, and Atomic Blonde to name a few. Netflix bingers might know him from the hit horror show, Hemlock Grove as Roman Godfrey.

The increasing number of credits behind Bill Skarsgård’s name is his strength, and his famous family have definitely helped his career. Alexander Skarsgård is his older brother who we know from HBO’s fang-y hit, True Blood. Gustaf Skarsgård is also a well-known actor in Sweden, and the family’s film background likely influenced Bill to find his true calling.

Also Read: Klay Thompson’s Girlfriend in 2017: Who Is the Golden State Warrior Dating?

While women are going crazy over Bill Skarsgård’s amazing looks, he allegedly fell for Swedish actress, Alida Morberg. When Skarsgård was spotted in New Orleans last year, he was holding hands with Morberg on the streets, but nobody could put a name to her face!

As neither have officially confirmed their relationship, we can only speculate who Bill Skarsgård might be dating in 2017. He was also spotted with Morberg in Toronto, Canada while filming It.

Alida Morberg (32) lives in Stockholm, Sweden, and judging by how often these two are seen together, it looks like she is Bill Skarsgård’s girlfriend. Since Sweden is his home as well, it makes sense that the two met there. As the actor has not been open about his past relationships, details about Bill Skarsgård’s dating timeline are not known. We can only say that he looks pretty close to Alida and this is one hot couple on the radar!