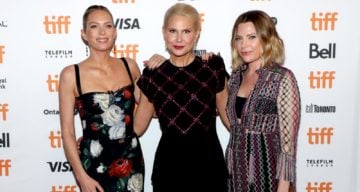 Erin Foster, Amy Foster, Jordan Foster attend the "David Foster: Off The Record" premiere during the 2019 Toronto International Film Festival at The Elgin on September 09, 2019 in Toronto, Canada. (Photo by Jemal Countess/WireImage)

Jordan Foster is the stylist to the stars! From her beginnings in music PR to her current work elevating celebrity wardrobes, Foster is a style guru that has always inspired us. And when we talk about this stylist, we can’t help being curious about her personal life. Her followers especially want to know who Foster is married to. Tom Woodger is a relatively private guy, though we get to catch glimpses of Jordan Foster’s husband on her social media pages. However, he is not far from the celebrity lifestyle himself. In fact, he’s been one of the genius minds behind celebrity-brand partnerships. This Tom Woodger wiki further reveals his work and  relationship with Foster.

Tom Woodger was born on December 30, 1985, and is a native of the United Kingdom. His family is from Kingsley, a village in Cheshire, England.

He is one of two boys born to Sylvia and Nigel Woodger. Their respective work keeps his parents and his brother, John Woodger, and sister-in-law, Lindsay Woodger, in London. Tom’s mother Sylvia has been a personal stylist and blogger since 2013.

After graduating from Newcastle University in 2007, Tom Woodger worked in Manchester. He was an entertainment marketing assistant for half a year at Weber Shandwick.

The following year, Woodger joined Momentum Worldwide. He advanced into multiple roles during his six years there. When he moved from the U.K. to the U.S., he worked in the New York branch.

He would leave Momentum Worldwide in 2014 to handle the global marketing division at Sonos for the next four years.


Later, he ran his own consultancy firm for brand partnerships. He served as an advisor to Happy Not Perfect, sweetgreen, and Red Sea Ventures, still continuing his work with the latter two.

He brought brands and influential personalities together in strategic partnerships and worked with the likes of Tribe, the Beastie Boys, Justin Bieber, New York Fashion Week, London Fashion Week, and Hay.

As of 2018, Woodger has been the vice president of brand and later global culture marketing at StockX.

Woodger met Jordan Foster in 2011 in London. The following year, he was in New York, where Foster was based in addition to Los Angeles.

They married on July 20, 2013, in Bel Air. The celebrity stylist donned a Monique Lhuillier gown, Giuseppe Zanotti shoes, and a Maria Elena hairpiece.

Woodger and Foster are parents to two children. Their first child, a boy they named Otto Tiger Maurice Woodger, was born on February 5, 2018. They welcomed their second child, Juni Margaret, in May 2020. The family had a party (within safety measures) during the pandemic to celebrate Juni’s first birthday.