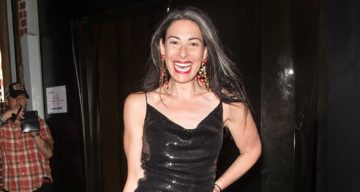 Stacy London, the star of TLC’s What Not to Wear, reportedly dated and was engaged to author Mark Riebling in the past. But she began 2020 by coming out as queer and revealing her girlfriend of a year, Cat Yezbak. They met when London was going through a difficult time, but have been going strong for over two years. London and Yezbak make an adorable couple on social media and serve as inspiration to the reality star’s LGBTQ+ fans. They are eager to know more about who Cat Yezbak is and what she does. So we reveal more details about Stacy London’s girlfriend in Cat Yezbak’s wiki.

Catherine “Cat” Yezbak was born on November 9, 1979. She is the only child of Charles Yezbak Jr. and Alice “Appie” Yezbak.

Cat’s family is based in Uniontown, Pennsylvania. Her father Charles is of Lebanese/Syrian descent and her mother Alice is Irish.

Charles has a dental practice in Uniontown. His late sister, Mary Louise Yezbak Chomiak, had a special bond with her niece/honorary granddaughter, Cat.

Cat Yezbak has a BFA in acting from Ithaca College. She has since pursued a broad entertainment career in New York City.

She was a member of the Flea Theater’s resident acting company, the Bats. Her work there included plays like Polly Draper’s Getting Into Heaven and A.R. Gurney’s O Jerusalem.

She has acted in stage productions like Medea Machine, Man Equals Man, and The Elephant Calf. She’s also had minor on-camera appearances in How I Got Lost, Parker & Maggie, The Impossibilities, 600 Hours, and Celebrities to Go.

Plus her Instagram bio states she is a voice-over actor.

Yezbak is also a musician on the side. She was lead singer of the Brooklyn band Caution Candy. Currently, she performs with a band called Local Woman.

Yezbak and Stacy London are co-CEOs of Small Beautiful Things, a concierge gifting service based in New York.

The last several years of Stacy London’s life have been eventful, to put it simply. While battling chronic illnesses, spinal surgery recovery, financial troubles, and mental health issues, the What Not to Wear star lost her father, Herbert London, in 2018.

Dating was far from her mind at that time. But that changed when she met Yezbak at a fundraiser for Cynthia Nixon’s gubernatorial bid.

They wouldn’t go on a date right away, as Stacy’s father was ailing with heart disease back then. However, they kept in touch, and Yezbak had been an emotional support to her while she was taking care of her father.

Herbert passed away in November 2018. Yezbak was present at his funeral. A month later, Stacy and Yezbak went on their first date, and have been together ever since.

The TLC star came out to her fans in a lengthy Instagram post on December 31, 2019. London confirmed the rumors of her dating a woman and made her relationship with Cat Yezbak publicly official.