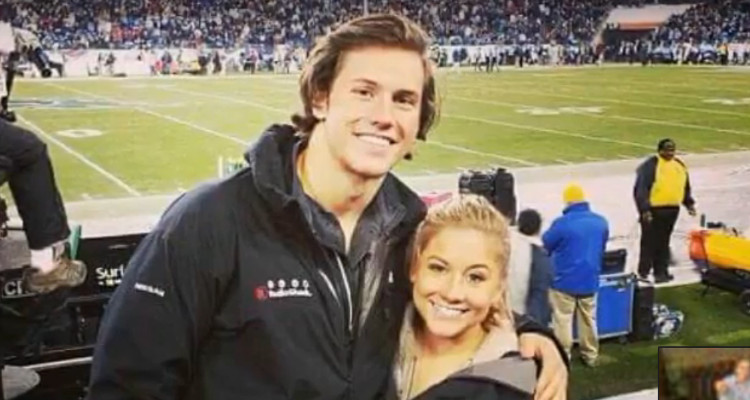 It has been a somewhat tumultuous year for Shawn Johnson and her husband Andrew East, as they struggled during their first year of marriage. With conflicting schedules, the stress of not being able to see one another often was stressful but they are still remaining positive. In fact, Johnson says that they are happier and closer now more than ever! East is a football player who is currently a free agent in the NFL, and most recently played for the Oakland Raiders.

The last few years have been a little rough for Olympics gymnast, Shawn Johnson, especially in regards to her marriage. Shawn Johnson’s husband, Andrew East, is a football long snapper who is currently a free agent and working hard to keep his marriage going. Shawn Johnson and Andrew East got married on April 16, 2016, in Franklin, Tennessee and are happy, despite personal and economic struggles. Johnson revealed that their first year of marriage was stressful as they did not see much of each other thanks to their tough schedules. “It’s been the craziest year of our lives. One day doesn’t look like the next for us!” she explained. Learn all you need to know about her football-playing husband, right here in our Andrew East wiki.

A Passion for Football

Born on September 17, 1991, in Indianapolis, Indiana, to Marsha and Guy East, Andrew East’s age is 26. He studied at North Central High School, before joining the Vanderbilt Commodores football program at Vanderbilt University. Before the 2015 NFL Draft, East attended the Owen Graduate School of Management. He inherited his love for sports from his parents as his father was a football player, and his mother was a basketball player. East has four siblings, three brothers; Guy, James, and Grant, and a sister named Christine.

East played football for several NFL teams, including the Kansas City Chiefs, Seattle Seahawks, Oakland Raiders for two stints, and the Los Angeles Rams. He is currently a free agent looking to joining a good team. In 2015, East proposed to Johnson at a Chicago Cubs game on July 24, 2015. Their wedding was a beautiful affair with Johnson wearing a unique custom gown designed by Olia Zavozina, a Nashville-based designer. The weekend was a love-filled, family-oriented event with lots of candles, flowers, and touches of gold that enhanced the romantic setting.

Loved you once, love you still. Always have, always will @shawnjohnson #wife #cheese #marriage

Since then, times have been tough for the duo who have an unwavering love for each other. Money was short and opportunities were hard to come by, but they stuck together and worked their way through. Johnson remembers, “We lived out of a Hampton Inn for four months and we cooked from our hotel room. It was a long few months; we went through hard things.” She continued, “He got cut from the NFL and tried out for another team, we were both going through stressful times in life.” They do not have any kids yet but are reportedly “happier and more in love than ever.”

This is when we still had enough energy to smile. @shawnjohnson #hike #grandcanyon #tired

The NFL free agent signed a two-year contract with the Oakland Raiders for $1.02 million in 2017, where Andrew East’s salary was $510,000. However, he was waived on September 2, 2017. Though Andrew East’s net worth is not known, considering how difficult it has been for him and Johnson to get on their feet, it might not be substantial. But with these two talented athletes, work and money are sure to come!