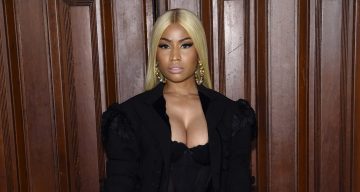 A serious feud seems to be brewing between rap goddesses Nicki Minaj and Cardi B. The original version of “Motorsport” by Minaj, Cardi, and Migos has everyone wondering if Minaj subtly dissed Cardi. Who is the “Nick Lombardi” mentioned in the original verse? Keep reading to find out!

After a long break, Young Money queen, Nicki Minaj returned with two new tracks, “Barbie Tingz” and “Chun-Li” off her upcoming fourth album. Minaj’s recent music offerings have been collaborations and features on other artists’ tracks. But instead of celebrating her newest solo music, Minaj ended up venting her frustration against Cardi B. The Internet is abuzz with speculation about the original version of the collaborative song, “Motorsport” and the lyrics referencing one Nick Lombardi. Here’s what you need to about the latest drama between Minaj and Cardi.

He Said, She Said

Migos recruited Nicki Minaj and Cardi B for their October 2017 song, “Motorsport.” But what we didn’t know was the drama brewing behind the scenes of the track.

Nicki Minaj addressed all the feuds she supposedly has in the business in a recent Apple Music’s Beats 1 radio interview. And she got candid about the fallout between her and Cardi B after “Motorsport.”

According to Minaj, Cardi claimed in an interview that she replaced the ”Bodak Yellow” rapper’s name with Quavo’s. And apparently, Cardi was upset about it.

But Minaj said in the interview, “When I first came in the game, if a female of [my] stature had done a feature with me on it, I would only be singing their praises and saying thank you,” adding, “The first interview [Cardi] did after ‘MotorSport’ came out, it just really hurt me, because she looked so aggravated and angry, and the only thing she kept saying was, ‘I didn’t hear that, she changed her verse.'”

How can you say someone changed their verse & forget to say Quavo TOLD me to remove my singing part (which I loved) & Atlantic told me to remove your name from my verse per your request? So how were those changes gonna happen if I didn’t “change” my verse? ?? #NickiDay #ChunLi

The feud rumors were further fueled when Minaj couldn’t film the music video because of scheduling issues.

Fresh off that interview, Minaj tweeted that Atlantic Records made her change the lyrics per Cardi’s request.

But why is the Internet divided over this lyric?

Is “Motorsport” a Diss Track?

Rumors about a beef between Cardi and Minaj have been brewing for a while. When “Motorsport” dropped, the rumors only intensified.

There was talk that the “Starships” rapper was blindsided when Cardi was brought on for the feature. However, Minaj claims she was informed about her collaboration well in advance.

So, what’s with the altered line then?

For those who don’t know, Vince Lombardi is a regarded as one of the greatest football coaches of all time. The NFL Super Bowl trophy was named after the Green Bay Packers’ coach. By referencing herself as Nick Lombardi, Minaj is apparently elevating herself to a coach who calls all the plays.

Some speculate that, by designating Cardi as a quarterback, Minaj is establishing the power dynamic between them. That reportedly made the Cardi upset and request that the line be altered.

However, many jumped in defense of Minaj, and attempted to squash the beef rumors.

Some speculate that Minaj was merely giving Cardi a shoutout. Since she had no problem replacing Cardi’s name with Quavo, the line was probably never intended to be a veiled diss at anyone.

She literally saying their on the same team & winning. This wasn’t a diss, this was endorsing her. Cardi took it wrong so Nicki changed it. It’s okay tho cause the one that’s out now she washed everybody https://t.co/i4FbbPYGOj

In fact, there doesn’t seem to be any bad blood between Minaj and Cardi at all.

Minaj said in the same radio interview that she receives love from Cardi. “Her most recent interview, Cardi, that’s when I came back on Instagram, I saw it, and I finally felt like she said something genuinely nice about me.”

Since Minaj has set the record straight, there’s no need to read too much into the Nick Lombardi reference. But obviously, people will always talk!