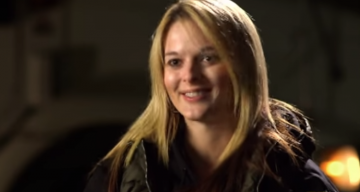 Some have called her Ice Road Truckers’ “hot chick,” while there are others who commented on Lisa Kelly’s weight gain, but we will dig deeper into what the 35-year-old is really like and what she has to bring to the table.

Who Is Lisa Kelly?

Lisa Kelly is a truck driver who was born on December 8, 1980 in Grand Rapids, Michigan and was raised in Sterling, Alaska. She was briefly enrolled at Cornerstone University but later decided to drop out and return to Alaska. She’s appeared on the show on and off since 2009, and now she’s back. Lisa Kelly’s net worth is estimated at $500,000. And for those wondering: Lisa Kelly’s husband is Traves Kelly and they have been married since 2008.

In a male dominated industry, women struggle to see equality and that includes the entertainment industry. Although Precious Cooper was the only girl on Street Outlaws, she didn’t last long, despite being a capable driver. For Kelly, she believes it’s more about the job than the opportunity when it comes to truck driving.

“It is a different kind of life,” she told Truck News. “So it’s kind of hard to get women into it if they want to stay home and raise families, you can’t do that and be in a truck because you’re gone for weeks at a time and come home for two days then you’re out again.”

She Wants to See Shorter Runs

As much as she loves her job, Kelly doesn’t like to be gone for weeks at a time, which is often a barrier for women being recruited into the trucking industry.

“I think I’d like to see shorter runs,” Kelly said. “A lot of the runs they do, you have to work six days on and you get one day off. That was my problem when I was applying for jobs; I don’t want to be gone that long, I want to work maybe part time or have a set run and that I think would make it a lot easier, because I want to be home. I love driving, but I’m not going to be gone for three weeks.”

Here's a shot of everyone's favourite Ice Road Trucker Lisa Kelly. We took this picture while riding with her from Anchorage to Fairbanks, Alaska. #iceroadtruckers #lisakelly

She Tries to Stay Active

Kelly wants to have her own local run and do more physical work. Being active is important to her, especially after witnessing a trucker have a heart attack and die while they were filming at a gas station.

“You sit on your butt, you get fat, you eat unhealthy at truck stops…it’s not healthy,” said Kelly. “You have to keep stuff in your truck and if you don’t have a refrigerator you have to just have stuff that doesn’t go bad or you need a microwave,” Kelly said. “So you’re just eating chips and nuts…you really just have to grab and go.”

Kelly doesn’t have Instagram, but there are several photos of her on Instagram at different events. She enjoys meeting fans and getting to see the people behind social media posts that support her.