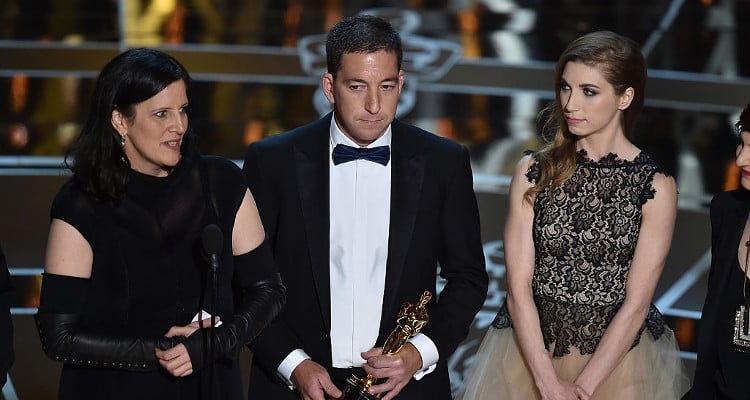 No matter how much time has passed, Edward Snowden will always be a person of interest. While he has taken asylum in Russia, people are wondering about his girlfriend. Is Edward Snowden’s girlfriend living with him in Russia? Let’s find out.

Who doesn’t know Edward Snowden? Call him a hero or a traitor; the man has to live like a fugitive on the run. He has taken asylum in Russia, but we do see him live a normal life. He pops up on his girlfriend Lindsay Mill’s Instagram now and then doing regular couple stuff together. Their relationship looks just as amazing as in the movie Snowden if not better. Are they together in Snowden’s Russian asylum? Here’s everything to know about Snowden’s girlfriend in our Lindsay Mills wiki.

She’s a Pole Dancer and Photographer

Both Mills and Snowden are from Maryland. She graduated from Laurel High School in 2003 and the Maryland Institute College of Art in 2007. She’s a photographer, and her Instagram has several of her artistic self-portraits. Many of her self-portraits often have a deep meaning with political and social interpretations. One of her photographs “Flecks” has her posing in the dress she wore to the Oscars when Citizenfour won for best documentary feature.

Aside from being a photographer, she’s also a pole dancer and acrobat. When she and Snowden were in Hawaii, she picked up pole dancing. She posted a video of her dancing at the Honolulu Fringe Festival and was also part of a local acrobatic troupe. She travels all over the world to perform while continuing to photograph more self-portraits.

She Had No Idea of Snowden’s Whistleblowing Plans

Snowden had moved to Hawaii with his girlfriend before he came forward to the press. Though they were living together, Mills did not know about his whistleblowing plans. In the Oscar-winning documentary, Citizenfour, Snowden said he intentionally kept his plans a secret so he could protect her and their family.

Hours after Snowden came out to the press, Mills hinted that she was blindsided by his move on her blog, subtitled, “Adventures of a world-traveling, pole-dancing superhero.” Since she did not commit a crime, she ran no risk staying in the U.S. and was free to travel. She was portrayed as a woman abandoned in the media which Snowden later said in an interview was unfair to her. Contrary to what was believed, Mills and Snowden are very much together and still going strong.

She Put His Death Rumors to Rest

A couple years ago, Snowden disappeared from the Internet scaring everyone into thinking that he died. But Glenn Greenwald, his journalist friend, and Snowden himself laid those death rumors to rest. As for an explanation for his disappearance, Mills revealed where he was during that time.

As it turns out, they were on vacation together. Mills tweeted a photo of herself and Snowden and wrote on her blog, “with the end of summer drawing near. the sun setting minutes earlier each day. and cooler currents whipping in. a vacay was in order. successfully hijacked this guy (sorry Twitterverse for causing such a scare.)”

.misfits. #selfportrait under hand crafted mementos. and bed head. a shared smile. between misfits. who found complement in each other. strength in numbers. laugh, play, and harmonize with all they have. whose love is reaffirmed in the hardest moments. and breathes in the down times. that devotion. brings back. to keep sorting strange shaped pieces. and form their peculiar puzzle of life. #happyvday

Is Mills in Russia?

After the former government contractor created the biggest scandal to hit the U.S. government by disclosing classified documents, he had to leave the U.S. He took asylum in Russia, at an undisclosed location. But is he alone? Mills’ Instagram and blog are filled with pictures of the couple together, which reveals that she is with him.

While Snowden is confined to Russia for an indefinite time, he perhaps has Mills to accompany him. Shortly after he left the U.S., she followed him to spend the majority of her time in Russia. She has no travel restrictions and can go anywhere she likes as a regular U.S. citizen. However, she has not permanently moved to Russia because of Visa restrictions. But, when she does, she makes sure to update the Internet on her boyfriend.