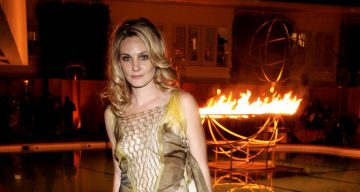 Formerly known as Harold Williams, the actor changed his name to Harold Perrineau, after discovering that there was already a Harold Williams in the Screen Actors Guild Union. Perrineau gained a lot of recognition thanks to his role as Michael Dawson in the show Lost, as well as Augustus Hill on OZ. Besides his work in television, Perrineau has also worked in several films like 28 Weeks Later, Zero Dark Thirty, The Best Man, and 30 Days of Night: Dark Days. His career has taken off, and the actor has five upcoming projects to be released within the next couple years. But what about his private life? Who is Harold Perrineau’s wife? Take a look at our Brittany Perrineau wiki to learn more.

Born Brittney Robinson in 1976, Brittany Perrineau’s age is 41 and she is a former model. Much like her husband, she now works in the entertainment industry as an actress and producer. It looks like she values her privacy, as there is not much known about her early life.

Us and trucker caps. Always. ?

My ?. #cherryorchardbway opening night. We did the darn thing. ???

Whaaaatttt?? Our friends @pairofthieves just knocked our "socks" off! #roaddogs4life #fathersdaycameearly Thank you!!! (Anyone who knows me knows I wear these as my good luck ? charm)

Brittany Perrineau married Harold Perrineau on August 27, 2002. The couple has three children together. Their eldest daughter, Aurora Robinson Perrineau, was born on September 23, 1994. Like her parents, Aurora is on her way to becoming a successful actress. She’s worked in several films such as Air Collision, Equals, Freaks of Nature, A House is Not a Home, Jem and the Holograms, and 2016’s  Passengers. Their second daughter, Wynter Aria Perrineau, was born on May 7, 2008 and took her time when making her entry into the world. While Brittany was pregnant (and due) with Wynter, Harold was shooting a show and was dilating, so she had to be rushed home. “I got home and then for another week, the baby would not come! We were like, ‘Seriously, dude, I was in Hawaii rushing like a madman!’I was talking to the baby, my wife was walking around, practically hiking, but the baby just would not come out!” Finally, she decided to come out and then a few years later, the happily married couple welcomed their youngest daughter, Holiday Grace, on March 21, 2013.

Also Read: Nadine Caridi: Everything You Need to Know about Jordan Belfort’s Ex-Wife

Besides her acting career and raising her daughters, Brittany and Harold joined Jeff Phelps to create Ice Cream Heads. Their company produces ice cream scented shampoos and conditioners that are distributed in different parts of the country from New York to California. They have not been active on Twitter since 2015, so details about whether or not the company is still operational is unknown.

Brittany and Harold Perrineau came up with the brilliant idea of starting the shampoo line, after they realized how difficult it was to get their children to like taking a bath. Their daughters would always run away and make bath time a hassle for their parents. This was when Harold joked that it was a shame that they could not wash their kids’ hair with ice cream. After two years of designing bottles, getting the fragrance formulas just right, and ensuring that the shampoos would not irritate eyes, Ice Cream Heads was born!