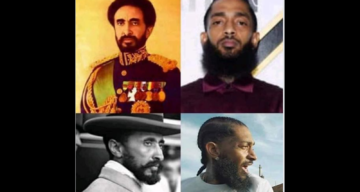 Nipsey Hussle’s death on March 31, 2019 has not only shaken the West Coast community he strove to make better, but also his father’s homeland that he represented. Following the rapper’s fatal shooting, his legacy and ancestry have been the center of attention. Nipsey Hussle, born Ermias Asghedom, had East African heritage. Now a Facebook post has everyone believing the rapper was related to Haile Selassie, the reportedly slain former emperor of Ethiopia. But is this true? Paging all historians everywhere!

Facebook user “Kateria Knows” is one of the many people whose lives were impacted by Nipsey Hussle. Since his death, Kateria Knows has posted various tributes to the slain rapper.

One of her posts is a collage of pictures of Hussle and former Ethiopian Emperor Haile Selassie I. The image has been shared several times on Facebook and received thousands of likes.

However, there’s no evidence to prove that as fact. Hussle has been open about his East African heritage, but he has no apparent connection to the Ethiopian monarchy.

Furthermore, the connection appears to be an extreme one, given that Haile Selassie was a controversial figure in East African history. He died on August 28, 1975, allegedly of respiratory failure. But almost two decades later, it was reported that he was assassinated by his military officers.

Hussle was fatally shot outside his Marathon Clothing store. Eric Holder has been charged with his murder.

Nipsey Hussle’s Family Is from Eritrea

Nipsey Hussle was born Ermias Joseph Asghedom in South Los Angeles to Dawit Asghedom and Angelique Smith. His mother is African-American, while his father hails from Eritrea in Africa.

According to Hussle, Dawit Asghedom left his family and home behind in Eritrea to escape the conflict between Eritrea and Ethiopia. He relocated to the U.S. where he settled with Angelique Smith and had three children, Samiel, Ermias, and Samantha.

Hussle has never been shy about his Eritrean roots, something his father instilled in him by telling his kids everything about his home country. Together with his father and brother, an 18-year-old Hussle visited Eritrea for the first time.

They stayed there for three months, spending time with Hussle’s grandmother and cousins. They also experienced several Eritrean customs and traditions.

Hussle would visit the country again as a famous rapper and representative of Eritrean culture. His death has not only affected the Crenshaw neighborhood he was set on developing, but also Eritrea where he was a role model.

But saying that Hussle is related to the monarch of Eritrea’s neighboring country is far-fetched. The Ethiopian-Eritrean conflict was at its peak during Selassie’s regime. He would unilaterally annex Eritrea from Ethiopia, leading a 30-year fight for independence. Eritrean separatists suffered large-scale human rights atrocities during his regime.

Haile Selassie was a member of the Solomonic dynasty and had a reign fraught with controversy. With his wife, Empress Menen Asfaw, he had six children: Princess Tenagnework, Crown Prince Asfaw Wossen, Princess Zenebework, Princess Tsehai, Prince Makonnen, and Prince Sahle Selassie.

The parentage of his older children is a subject of controversy. However, a look at his family tree reveals he has no connection to the Eritrean, Dawit Asghedom.

It’s possible that the Asghedom family could have their origins in Ethiopia as many Eritreans do. But it’s unlikely that the rapper’s paternal family is connected to Haile Selassie or his known descendants.

Dawit Asghedom has strong patriotic feelings towards his homeland. Not only has he made sure his children know of their Eritrean roots, he’s also as active in and dedicated to the Eritrean-American community as Hussle was to helping Crenshaw.