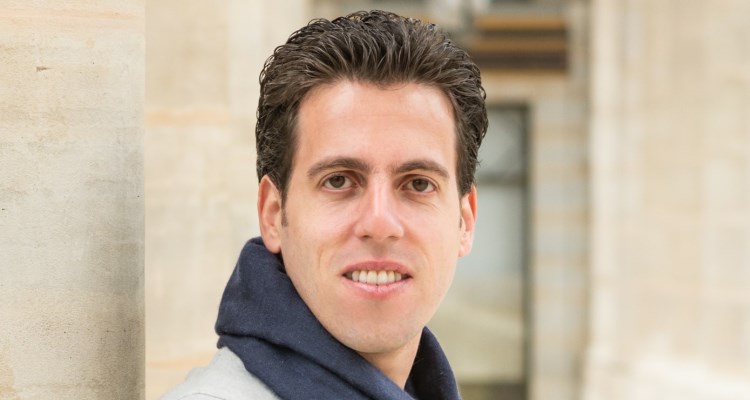 Photo: Tom Volf, "Maria by Callas: In Her Own Words"

TIFF 2018 has arrived and as actors, directors, and fans head to the red carpets in anticipation of this year’s films, there are a few that are already sparking a ton of buzz!

There’s one director in particular, who has made it his mission to showcase an artist like no other, in a documentary unlike the rest. For five years, Tom Volf has submerged himself into getting the true story of Maria Callas, one of the most outstanding opera voices of the 20th century.

But what makes her story so interesting is the woman behind the music. Director Tom Volf has spent endless hours digging up the details of Callas, her incredible backstory, and the fascinating woman she truly was underneath it all.

Through immense research, letters, recordings, and personal interviews with those who knew her best, Volf brings the true story of the iconic opera singer Maria Callas to the big screen at TIFF 2018. We got to sit down with Tom Volf to discuss his incredible journey behind his film, Maria by Callas: In Her Own Words. Check out our exclusive interview with him below!

Q: She was an incredible opera icon during her time. What initially drew you to make this film about Maria Callas?

A: Well, it was a journey of discovery, actually. Of discovering myself, too. Because I didn’t know much about opera, I wasn’t really an opera fan. My background is in film and photography, but I was not into classical music at all. Until I actually discovered Italian opera, and that drew me to her.

She started fascinating me, as she does with a lot of people (both as a woman and as an artist) and I think that’s one of the things that makes her so interesting and unique; the fact that her career is as fascinating as her life itself. One could say her personal life was like an opera because the story is such an uncommon destiny; coming from nothing to becoming this world-renowned celebrity in opera.

But there was a lot of drama in her life and a lot of ups and downs. So, I think it’s right to say that her life was very intense from beginning to end, and in this way, can be compared to an opera. She was very intense as a person also, and that’s what also made her very unique and attracted so many people all around the world. She was a very modern woman, to say the least.

Q: Can you tell me why you chose to name the documentary, Maria by Callas: In Her Own Words? More specifically, what is meant by inserting the word “By” before “Callas” in the title?

A: You know, there have been a lot of books and biographies put out about her, but there has never been any project or book or film that is entirely in her own words. And it was very important for many reasons; first of all, there were a lot of untruths told about her, even during her own lifetime.

And you know, she always had this will to correct the truth and to tell her own story and she wasn’t really ever able to do that. It was very important to me that after so many years, there is once and for all, a film where she is speaking from beginning to end, and it’s her voice and her side of the story. A lot of so-called “scandals” are understood in a completely different way because she is bringing together all the missing pieces of the puzzle.

She was a victim of the media of her time, using the dramatic events that happened to her and often turning them against her as scandals of her own.

Secondly, it’s called Maria “by” Callas because she is the first and foremost narrator in the film, and I did it in this way because the film reveals the woman behind the legend. It is Callas, the artist, the public figure, who reveals Maria, the woman. As you know, there is a conflict of struggle between the two as she says herself, “I would like to be Maria, but there is this Callas that I have to live up to.”

And that really says it all about the duality between them, almost like there was two women inside of her; the woman and the public figure, the artist. And they kind of struggled with one another all throughout her life. So, there is this idea of the duality between the two, and at the same time, it is Callas that revealed Maria and not the other way around. It is through the artist and the public figure that we begin to see the true woman inside, who is quite different and unknown.

Q: You spent a great deal of time researching Maria and studying archives, speaking to those who knew her, and digging deep into the kind of woman she truly was. Is there anything specific you uncovered that people may not have known about?

A: There is a lot. I spent nearly five years going around the world, studying her, and meeting all of the people still alive who were closest to her. And I was very privileged to be entrusted with a lot of material that has never been seen or heard before, so the film reveals a lot of new material (personal belongings, letters, recordings), so there is a lot of that.

Q: You said earlier that you didn’t always have a love for opera, but you became interested in it after learning more about Maria. Is there any other artists like Maria Callas you’ve become fond of?

A: Yes, my discovery of opera was very specific. It was one night at the Metropolitan in New York that was really out of the blue. I mean, I was literally walking down the street (I was living in NY then, I was a student) passing by the MET Opera and it was like quarter to eight, and I just went in and bought a ticket; it was really completely spontaneous! And they were playing Maria’s music by Donizetti (which is a really beautiful Italian opera) and it was Joyce DiDonato who was singing.

That was really the first time I was love-struck by the opera, and that led me to Maria Callas because it was the same night, I was so inspired and uplifted by that evening and performance that I went back to my room and spent the night getting to know more about Italian opera.

I was very privileged to meet Joyce [DiDonato] and to become friends with her. To me, she is one of the artists in opera today that are in the same lineage, shall we say, as Maria Callas, in terms of bringing together not only extraordinary technique and performance, but also in merging the technique with interpretation and giving life to characters, beyond just singing the notes. And that’s really what Maria Callas was all about. For her, it was about giving life to characters, it was about making opera like film, like real theater. That to me, is similar to what Joyce does.

I think Maria Callas ultimately wrote a revolution in opera. I believe there was a “BC” and an “AC”; “Before Callas” and “After Callas”. The “After Callas” gives to a whole generation of artists the notion that performing opera went beyond the notes. There is respect to the score and the utmost respect to the composer, but also digging deep into the characters and being able to bring these emotions through their voice to the public. That is something truly extraordinary.

Q: I understand that this documentary was released last year in France in December (and all across Europe), so will this be your first experience at TIFF and in Toronto?

Q: Toronto is quite a big city! What do you hope to gain from your experience at TIFF this year?

A: It’s really special, you know, because to me it’s a whole journey. Having it out in the cinemas all across Europe was a beautiful journey, so I was travelling for the past six months with the film. And this is like the continuation of the journey, and now it’s taking a new step in reaching the north American audiences.

I feel very privileged and humbled that Sony Pictures Classics has decided to take the film for distribution in North America. Having been selected by TIFF is another privilege, so I’m really humbled and excited about all of it. But you know, I take little credit for myself; I humbly put together all this work. But beyond all of the years worth of work, the joy for me is to be able to bring Callas to the public and to a whole new generation of people who may not know much about her and who will get to discover her. This is my greatest pride, to bring her to people who may have never heard of her.

Q: Lastly, what do you see for the future? Do you see yourself doing more documentary style films? Maybe attending TIFF again with new projects down the road?

A: I do hope so! I’m a filmmaker, body and soul. So, I do hope to be back! And though I have no concrete plans yet, there are several projects that I am contemplating, both documentary and non-documentary.

So, I am bringing this journey to an end, hopefully by the end of the year with both the American and Asian release, which will be in December because it will be released in Japan also. But after that, we’ll see! I’m open to anything!