Documentaries are one of the most potent forms of storytelling, and TIFF 2018 has an entire section dedicated to them. Come September 6-16, 2018, festival-goers will have the opportunity to watch some of the best documentary makers in action! The topics explored are very timely and apt for the situation our world is currently in. We bring to your attention six of the finest of these films, which will all be screened at TIFF 2018.

The Toronto International Film Festival (TIFF) 2018 is just around the corner, and people are deciding which films and offerings they will check out at the event. The festival starts on September 6 and ends on September 16, 2018, in Toronto, Canada. Every year, it draws scores of excited filmgoers, not to mention the appearance of big names in the industry. Attendees are always hoping to catch a sighting of their favorite celeb!

There are different sections at TIFF 2018, and one of the most eagerly awaited is the Documentary section. Many topical, incisive, and compelling documentaries will be screened at TIFF 2018, bringing the talents of many known and unknown artists and directors to the forefront.

We bring you a selection of six TIFF 2018 documentaries to watch out for because they all tell amazing stories and provide new perspectives and in-depth details on the topics surrounding them. Many of them will address some of the most important issues of the times, like status of women in society, the conservation of wildlife, the rise of influential politicians, and the eternal struggle to make life better for oneself. Let’s take a look at the ones being buzzed about this year.

In a brave attempt to help resolve the identity crisis that many Islamic people are experiencing, writer, director, and journalist Jawad Rhalib comes up with a timely exploration of Muslim identity. He uses archival footage, interviews, and emotional performances from his cast to draw an evocative image of the community in respect to artistic expression and dangerous stereotypes. Rhalib puts the spotlight on a community set adrift in a time of relentless change where the future is viewed with fear and fascination.

Master documentarian Frederick Wiseman makes a triumphant return to the festival circuit with his study of small-town Midwesterners who tilted the 2016 American presidential elections. Seen in the light of what has happened in the political landscape in the almost two years since then, it becomes essential to understand this event. American politics can never be the same again after the residents of Monrovia, Indiana have spoken with their votes.

Also Read: Female Directors to Watch Out for at TIFF 2018: The Bold Arrival of a New Generation

A must-see movie for those who are interested in knowing what is happening in Libya, especially after the “Revolution.” Arebi offers a close and intimate look through the eyes of an aspiring all-female soccer team even as they struggle to gain mainstream acceptance. The feelings and emotions of this team mirror the larger and broader challenges that women in contemporary Libyan society still face. It’s not a “feminist” film by any means. It’s just a look full of empathy at the problems women still face in different parts of the world. 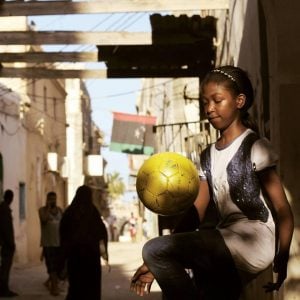 A still from the documentry Freedom Fields Credits: Facebook/freedomfieldsfilm

Through testimonies from the father of Perestroika Mikhail Gorbachev, Boris Yeltsin, and Vladimir Putin himself, Mansky puts together the fascinating story of how Putin rose to power. It’s a close look at how a powerful man of one of the most assertive countries of the world has held on to power for almost two decades. And the future is still wide open for Putin.

The documentary chronicles the lives of several women who have to leave their families so that they can find husbands for themselves and provide for their dependent families. Considering that women bear the burden of hard work and labor in most parts of the world even today in 2018, it is a searing look at the unfairness of it all.

Veteran wildlife filmmakers Victoria Stone and Mark Deeble capture (on celluloid) the journey of a majestic female elephant as she leads her herd in search for a new and suitable place to call home. It is empowering and breathtaking as the sheer beauty of Kenya shines through in every frame of the documentary. It tells us all that we share one thing with all the animals of the world: we seek the comfort of home no matter where it takes us.

A still from the documentary The Elephant Queen Credits: Facebook/theelephantqueenmovie