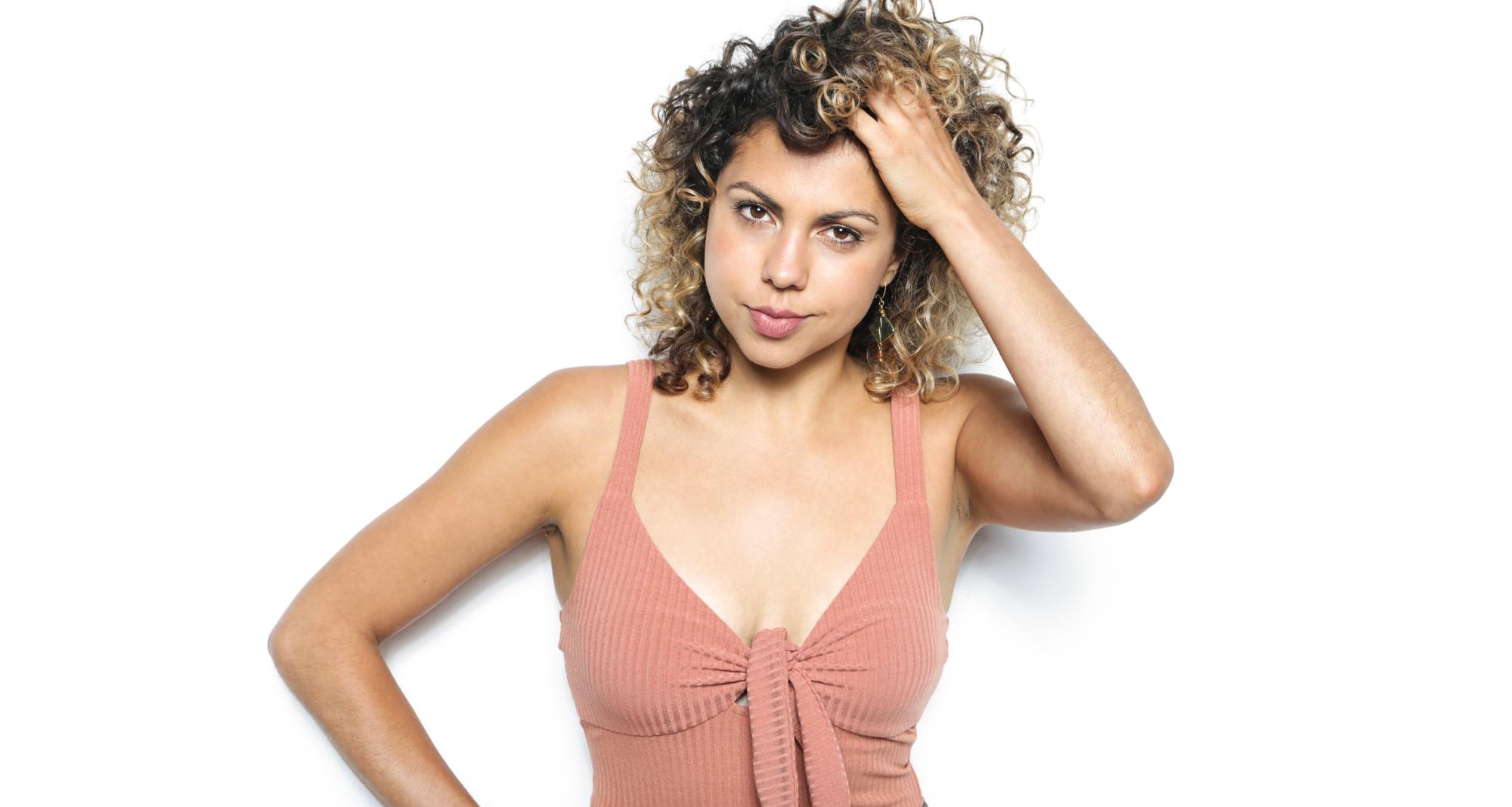 You may recognize her from the popular Canadian crime-drama, Mary Kills People. Or for her role as the female hockey team captain in the hilarious series, Letterkenny. Either way, this young Canadian actress is making big moves from the small screen, and she has an all-new role in a dramatic film being featured at TIFF 2018.

With this young beauty on her way to the top, we sat down to ask her a bit about herself, her exciting role in TIFF’s Mouthpiece, and her involvement in an online feminist power project that’s very close to her heart.

She’s an up-and-coming actress with the chops to take on both comedic and serious roles, and this year’s Toronto International Film Festival might just be the catalyst to put her on the map! Check out our exclusive interview with Jess Salgueiro below!

Q: Everyone and their mother is already buzzing about this year’s Toronto International Film Festival (TIFF), and you’re being featured in one of its film titled “Mouthpiece.” Can you give me an idea of what the film is about and a bit about your role in it?

A: The film is about a young woman who is grieving the sudden death of her mother and it has a lot to do with the things we inherit from our mothers; the goods things like the strength and beauty, but also the not-so-good things, like the self-limiting beliefs, the insecurities, etc.

The main character is named Cassandra, a modern young woman who definitely identifies as a feminist. She’s kind of coming to terms with her mother’s more conservative ideas about femininity. So, it’s a major exploration of those themes, a dive into the many layers of feminism, because she was so different from her mother in that sense.

I play her best friend, Roxanne. And she’s sort of the friend that I think everyone needs during such a time, the kind of friend that picks you up off the floor and gives you some tough love. It was an amazing experience filming this, it was originally a play that garnered huge esteem here in Toronto. The process of adapting it to film was so collaborative and exciting. We felt like we were creating something super creative and magical everyday.

Q: What type of woman is Roxanne & why is her character so important?

A: She really marches to the beat of her own drum, which is really refreshing to see because we don’t often see female characters like this. She has a huge heart and she doesn’t like to see her friend completely obliterated. Roxanne, too, has gone through her own struggle and dealt with her own demons to be able to look at her friend’s situation honestly, and she’s able to hold all of that for her and with her. Roxanne comes in at the right moment when it seems Cassandra might not recover.

Q: I know a lot of us have probably had that experience (or one similar to it) in real life; have you ever had an experience like this one where you’ve had to be someone’s pillar of support?

A: Oh yes totally, and vice versa. Moments when we can be resistant to reaching out for help and we have that friend who says “No. You need me and I’m not going anywhere.” Fortunately I have a few Roxanne’s in my life. 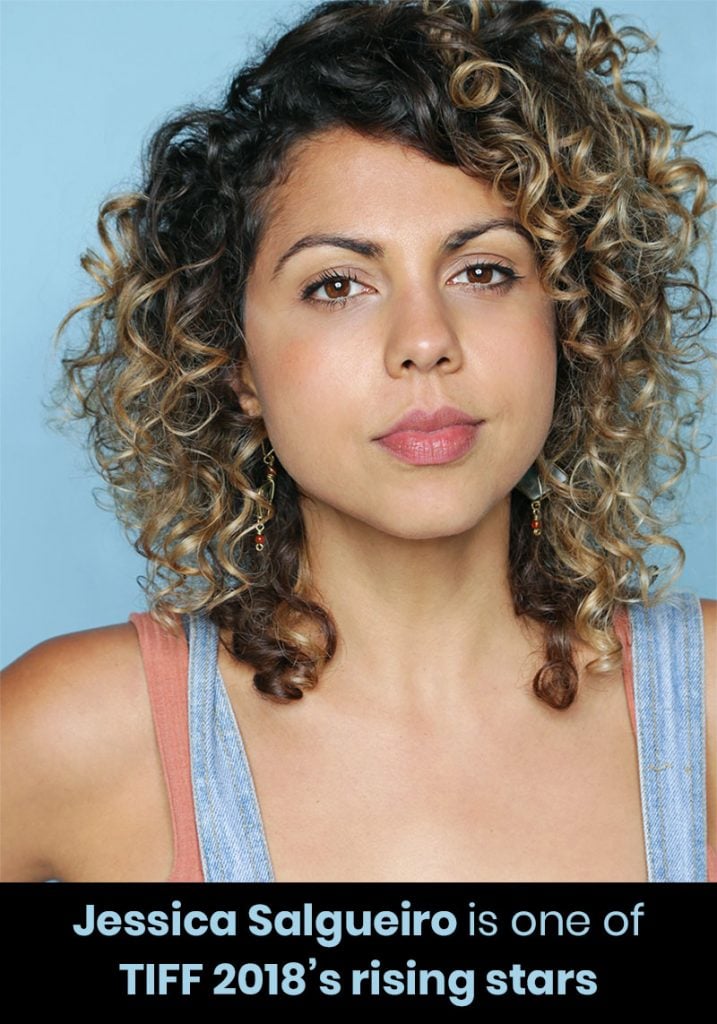 Q: So, how exactly did you get involved in this film? Were you aware of the story line?

The director, Patricia Rozema, I had seen her at a panel last year and I remember she was interviewing another female director and she was like so bold in the questions she was asking. And I remember leaving being like “Oh. My. God. Who is that woman? She is so brave and ballsy!” And then when I got the chance to audition for her, I was like “Yeah, this is exactly the kind of person I want to work with.”

Q: And, I think you’re a bit of a feminist yourself! Tell me a bit about “BitchesBeWitches” and the inspirational website you’ve got going on. That poem “b.I.t.c.h” is incredible and must really speak to women!

A: Oh, totally! It’s funny because I wrote that years ago and it just stayed on my laptop. My friend and I wanted to start this website called “BitchesBeWitches,” where we wanted to profile women who we thought were healthy reference points for other women, and then just as we were starting to launch it, I found that poem and my friend said, I think this is exactly in alignment with what we want on our site.


Q: Did you always have a vision for “BitchesBeWitches” and did you always find yourself so passionate about feminism?

A: It was a couple years ago when I was having a really rough time with my career and during a time when I was just struggling personally; I was battling an eating disorder. And, my sister, who has always been a hero to me, (she’s a women’s rights activist) said, “I think you need to start writing about what’s going on with you.” So, I started writing and I kept exploring how I could possibly listen to my own intuition better. And I realized that when I seemed to be listening to my intuition, were moments that seemed to have a sort of special harmony to them. Usually during some kind of creative endeavor, when I felt that something inside me was guiding my actions.

Meanwhile, I was getting super curious about women who follow their passion and seemed to have an intimate relationship with themselves.  I started interviewing women who I thought were really unique and authentic.

And the more I started doing this, the more I felt that this could be a community. I hoped that young women or women of any age, could look at the profiles we do and the content we feature when they needed a reference point of a strong, authentic female.

It started out as content we had written and interviews we conducted but now it has become heavily submission passed. People contribute their own articles, reflections, poems, thoughts, etc.

Q: Amazing! Women always need that type of inspirational outlet and I believe Mouthpiece will showcase themes like the power of femininity. Speaking of which, will this be your first TIFF experience?

A: To this degree, yes. I was in a film last year, but I had a very small part; it was Molly McGlynn’s film, “Mary Goes Round.”

So, through that, I got an industry pass and I got to see the panels and films and experience TIFF in that sense. But this year, I’ll definitely have a different experience with more access, especially with the TIFF Rising Star Program

Q: What are you most looking forward to this year at the festival? Any idols you’d like to meet or people in the industry you’d love to work with?

A: Omg… there are SO many. I am just excited about the people I don’t know, you know? To be honest, I’m excited to meet people like Claire Denis and I am excited to see films, especially from young female filmmakers. I think it’s a really exciting year for that!

Q: Well, it’s certainly not all seriousness in films for you! You have been featured in a few hilarious Canadian comedy series like Letterkenny and Workin’ Moms. How were those experiences for you?

A: What’s cool actually is that Canadian shows are now getting a new light because of all these new online streaming platforms! I recently appeared on the newest season of Letterkenny as the captain of the women’s hockey team.

It was so funny, I swear being on that set, I remember the first day I was leaving the set with chest pain, and realizing it was from holding in my laughter all day during shooting! It was just so hard not to laugh!

It airs on Hulu now, and Letterkenny got an amazing article written on it by an American reporter and now they have fans from Florida and other parts of the U.S. I was just like, wow, they get it (the Canadian humor), it’s translating!

Also Read: Female Directors to Watch Out for at TIFF 2018

Q: Now, growing up did you always know that you wanted to be an actress?

A: Uh…yeah lol. I either wanted to be a nun, a female rapper, or a movie star. So random, I know! I have always been very expressive, and I’ve always been looking for ways and places to express myself—whether it’s in writing or acting.

Q: What does the future look like for you? Any future projects in the works or places we might see you next?

A: I’m actually starting a film in two days, a feature called Canadian Strain. It’s about the legalization of weed in Canada and I play the lead character, a weed dealer who is now trying to find her place after the whole country has shifted its politics around it. It’s really cool and has a great cast and I’m really excited about it!

Q: To be released next year?

A: Yes…well I think they are going to try and release it asap, we are really hustling to get it done even before everything becomes legal in Canada.

I am also recurring on a couple of new shows too; one on Amazon called “The Boys” (It’s Seth Rogan’s new show and it is really, really cool)! I dunno, I am hoping that the future holds some really challenging and fascinating stories that I get to be a part of, and I want to keep writing.

I just want to work with people who are change-makers and who are committed to telling really honest and vital stories. And I love Canada, so I am happy if that’s in Canada, but also if it takes me other places, I am totally open to that too!