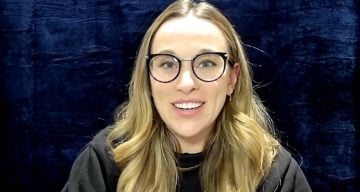 True crime aficionado and host of one of the popular podcasts in the genre, Ashley Flowers had a big announcement for her social media followers Sunday (Nov. 14). The Crime Junkie and Full Body Chills creator and co-host revealed that her family is growing. That’s right! Ashley Flowers and her husband, Erik Hudak, are expecting. Flowers made her pregnancy announcement on her official social media pages, which had been briefly inactive. Here’s what the podcaster revealed.

Ashley Flowers, who co-hosts Crime Junkie with her best friend Brit Prawat, recently wrapped season 3 of her other popular podcast, Full Body Chills, just before Halloween. She and Prawat have been regularly uploading weekly episodes of Crime Junkie, but Flowers had been inactive on her personal social media pages since Halloween.

Until November 14, when she did a “photo dump.” Flowers announced her pregnancy through this latest post.

She revealed she is seven months along and kept her pregnancy a secret until this milestone. She shared stills of her sonogram along with her unborn baby’s own Crime Junkie merch. It appears that she and her husband went with a Handmaid’s Tale theme for Halloween, and her husband, Erik Hudak, is already coming for the “Best Dad Ever” title with his cup.

Flowers married her high school friend, Hudak, on December 31, 2017. He works for Indianapolis Power and Light, but has a background in medical sales, same as Flowers before she became a popular podcaster. This is the first child for both.

Flowers’ followers and friends are ecstatic for her. The comments section is inundated with messages of congratulations and support.