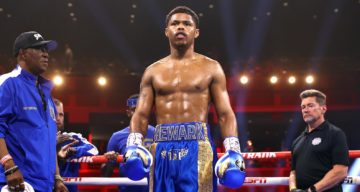 Young Lyric has a baby lyric on the way! The rapper and her current beau, Shakur Stevenson, are expecting their first child together. The low-key couple who have been treating their social media followers to glimpses of their relationship for a year announced Lyric’s pregnancy in October 2021. The former reality star who once famously dated NBA YoungBoy has her fans excited about the news. Here are more details about Young Lyric’s pregnancy.

Young Lyric, who was born Lyric Michell Ragston on July 30, 2000, hails from Texas. Since her arrival on the scene at the mere age of seven, Young Lyric has been an unstoppable force.

The star of Lifetime’s The Rap Game previously dated NBA YoungBoy in 2019. But their brief relationship was the subject of online trolling before it ended.

Lyric and Shakur made their relationship Instagram official in December 2020. They don’t often feature on each other’s social media, and the public sightings of them together are next to none. However, their followers are in love with this couple.

Now the hip-hop princess is expecting her first child with Stevenson. They announced it on their respective Instagram pages on October 17 with a pregnancy photoshoot.

Michell didn’t give many details apart from a cryptic reference to the world emoji in her post and in the comments of Shakur’s Instagram. Shakur, however, revealed that they are expecting a girl, and the dad-to-be is ecstatic. Neither has revealed a tentative due date or how far along Lyric is.

False rumors about pregnancies have followed Young Lyric in recent years and she’s always brushed them off. This is her first pregnancy and her first child.