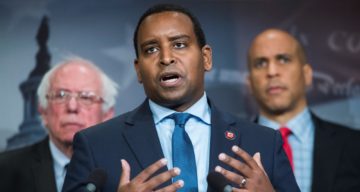 U.S. Representative from Colorado Joe Neguse was on Capitol Hill during the January 2021 insurrection while his family was back in Colorado. His wife, Andrea Neguse, updated concerned social media followers in Colorado that he was unharmed and doing fine. Now Andrea is supporting her husband and other lawmakers during Donald Trump’s impeachment trial. She has been a constant presence throughout Joe’s political career, and has also supported the causes that define Joe Neguse’s tenure. That’s why she is deserving of the spotlight in this Andrea Neguse wiki.

Born Andrea Jimenez Rael on March 19, 1987, she grew up in Broomfield, Colorado. Her parents are Bill Rael and Gloria Jimenez.

Many members of Andrea’s maternal family have served in the military. While some were in World War II, others are on active duty as well.

Her grandfather, Pete Jimenez, served in the U.S. Army, was a World War II veteran, and earned multiple military honors including Knight in the Order of the Legion of Honor, France. His brother was killed in action in the Battle of the Bulge. He passed away in 2006, at the age of 89.

Andrea’s uncle, David Leon Jimenez, was in the Vietnam War and was critically injured towards the end of his military career. When he returned to civilian life, he met and forged a friendship with reality star Dog the Bounty Hunter. He passed away in December 2020 of COVID-19 and complications of his wartime injuries.

Andrea Neguse received her bachelor’s degree in journalism, news editorial, with a minor in political science from the University of Colorado at Boulder. While still in college, she was the president of the first Global Zero chapter in Colorado and interned at the Boulder Daily Camera and Law Week/State Bill Colorado.

She began her media career in 2010 as a blogger and citizen journalist. She was the associate editor at The Huffington Post in Denver before switching to a career in the tech world.

Neguse’s hobby of coding and development turned into a full-time career after a bootcamp. She is now a developer based in Colorado.

She was lead developer at Spotzer, a digital marketing solutions company based in Amsterdam, Netherlands. She specializes in PHP and WordPress.

This little lady is turning 2!
May the force be with us all. pic.twitter.com/UO75qTR7Fc

The couple welcomed their first child together, a daughter named Natalie, in August 2018. Natalie and Andrea can be seen on the U.S. representative’s social media and at events.

Natalie stopped by to visit dad (aka @RepJoeNeguse !) and have lunch (aka 🍼🍼🍼) in his new office. Pretty stoked to add these gems to the baby book pic.twitter.com/t95854Wjh1