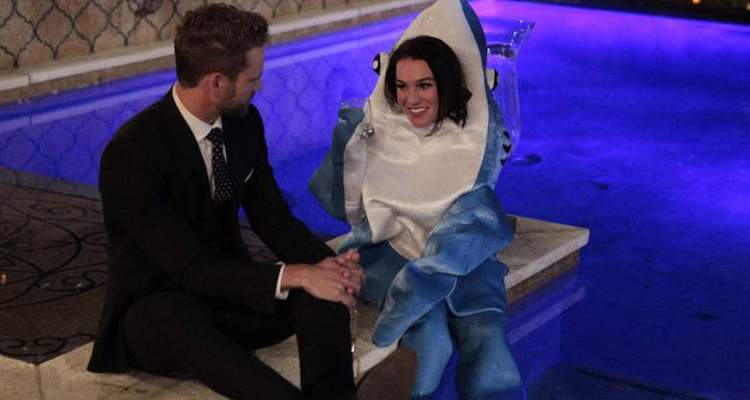 Alexis Waters took her clowning to the next level during week two of The Bachelor. She began the show with a shark/dolphin costume and ended up celebrating the birthday of her breast implants with Nick Viall. What on earth does a girl with such enthusiasm do for a living?

The young contestant is very passionate about marine life, and we’ve got some interesting facts about Alexis from The Bachelor’s job. What does Alexis from The Bachelor do for a living? Before getting started, we’ve got one clue—it has to do with dolphins, which is hilarious considering she confused her shark costume for a dolphin one! Maybe the production team needs to ease up on boozing the contestants? Here are some interesting career facts about the amusing Alexis Waters.

When 23-year-old Alexis first met Nick dressed as a “dolphin,” most people immediately found her funny and adorable. Her costume also lit up Twitter with discussion of whether she was dressed up as a dolphin or a shark. The confused contestant and bachelor had a lengthy discussion about her animal costume, and Nick finally had to burst her bubble by telling her that (due to the large fin and sharp teeth) her costume was in fact a shark. As it turns out, Alexis aspires to train dolphins, but doesn’t seem to have any education or work experience, which explains why she was confused about her costume. Well, here’s to dreamers! Alexis loves all things ocean related. Her ABC profile says her favorite movie is Titanic, and if she could be any fictional character she would be Ariel from The Little Mermaid.

I felt like Reese Witherspoon in Legally Blonde when they tell her it’s a costume party and she shows up as a bunny and nobody else is in a costume…..#Awkward #OneWeekAway #BachelorPremiere #Jan2nd ????????❤

Also Read: Alexis from “The Bachelor”’s Family: 4 Facts You Need to Know

For The Bachelor universe, age is just a number when it comes to love. Alexis is 23, while Nick is 36—one of the oldest bachelors in the franchise— but his boyish good looks had us fooled! Alexis considers herself caring, romantic, and honest, and her fans are hoping her personality and sense of humor will continue to impress Nick and eventually win over his heart. Tune into The Bachelor Mondays at 8:00 p.m. EST to find out!