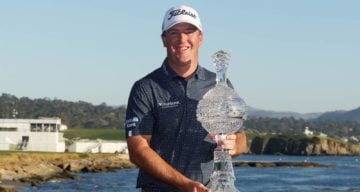 Tom Hoge won the first PGA title of his career! The golfer beat three-time major winner Jordan Spieth to be named the 2022 AT&T Pebble Beach Pro-Am champion on February 6. The accomplishment not only put Tom Hoge on the map, but also drew attention to his personal life. Golf fans want to know who Tom Hoge’s wife is. Kelly Hoge has a background in golf herself. So she knows a thing or two about the effort her husband puts into the sport. They are, however, a relatively low-key couple, and their social media followers are keen to know if Kelly has a part in Tom Hoge’s improving drive. We reveal her golf connection in this Kelly Hoge wiki.

Kelly Lorraine O’Brien was born on June 18, 1991, and hails from Minnesota. She and her brother, Ryan O’Brien, grew up in Maple Grove.

Kelly and Ryan are the children of Mike and Tammy O’Brien. Mike is also an avid golfer.

Like her father, Kelly O’Brien also played golf. At Maple Grove Senior High School, she lettered four years in golf and was team captain twice, among other achievements.

After graduating in 2009, she attended Montana State University where she was part of the 2011-12 golf roster. While competing on the Bobcats team, O’Brien was named Big Sky Golfer of the Week and was tied for first at the Bengal Classic.

Now known as Kelly Hoge, she majored in marketing and graduated in 2013. It appears that she didn’t continue playing golf competitively after college, and there isn’t anything known about her current career.

Tom Hoge was born in North Carolina and grew up in North Dakota. He played college golf at Texas Christian University before turning professional in 2011.

Kelly and Tom have been together at least since 2013. Kelly as well as her mom Tammy O’Brien have been celebrating Tom’s accomplishments on their respective social media accounts since then.

Kelly and Tom Hoge married on December 3, 2017. They are currently based in Fargo, North Dakota.