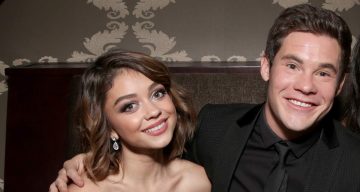 Love was in the air on last night’s episode of Modern Family, but something, or should we say someone, was missing. Watching Haley Dunphy go on a date with her sister Alex’s professor made fans miss Andy Bailey. Haley’s former boyfriend hasn’t been seen in a while, so naturally, fans are wondering what happened to Andy on Modern Family. Did Haley and Andy break up? In case you missed what went down, we’ve got the scoop for you right here!

If you’re a Modern Family fan reminiscing about Haley and Andy getting back together, you’re not alone. Over the last two seasons, many fans have been calling for Andy’s return on the hit show.

Haley and Andy made an adorable couple and for years, fans believed they were truly meant to be. Who can forget that passionate kiss they shared in Phil’s sexy house?

So, where is Andy on Modern Family? Did he leave the show for good? Keep reading to find out more.

From Joe’s Manny to Haley’s Boyfriend

We first met Andy, played by Adam Devine, in season 5. He was employed by Gloria as her son’s male nanny—or manny.

Andy quickly became an important part of the family. His first meeting with Haley may have been a bit rocky, but we saw a spark between them after Andy lied about the broken beer bottles to protect Haley.

Even though Andy was in a long-distance relationship with his girlfriend, Beth (and was even set to marry her), fans loved Andy and Haley’s sizzling chemistry. When Andy and Beth broke up, everyone was excited to finally see Andy and Haley get together.

Did Haley and Andy Break Up?

From Haley being able to be herself around Andy to the passionate kisses the two shared (the one in the pouring rain is our favorite!), fans were looking forward to seeing more of Andy and Haley’s relationship.

But it was not meant to be. Andy got a great job as a realtor in Utah and decided to relocate. This heartbreaking scene in 2016’s season 7 finale left us reaching out for more tissues!

As the two bid each other an emotional goodbye, Andy said he loved spending every minute with Haley while she said he was the first man she ever loved. Then the two shared the most beautiful farewell kiss (and you could literally heart fans’ hearts breaking everywhere). That’s the last we saw of Andy, leaving the relationship hanging in the balance.

With Haley dating other people now, it may seem that the two broke up or just lost touch, but nothing’s been confirmed.

Wednesday night’s episode was not the first time fans missed Andy. When Haley’s ex-boyfriend, Rainer (played by Nathan Fillion) proposed to her, many still hoped for Andy to get back together with Haley.

Also Read: What Happened to the Kids on “Mom?” Where Are Violet and Roscoe Now?

Where Is Andy Now?

Adam Devine has been busy with his acting career. He starred in numerous films in the last few years, including Pitch Perfect and Pitch Perfect 2.

Devine was recently seen in the Netflix film, When We First Met. Later this month, he will star in another Netflix film, Game Over, Man! with his former Workaholics co-stars, Anders Holm and Blake Anderson.

With Devine’s growing film appearances, it remains uncertain if he’ll ever make a comeback on Modern Family.

Fans are still dying to see Andy and Haley reunite—we can only hope that the producers one day hear their plea!