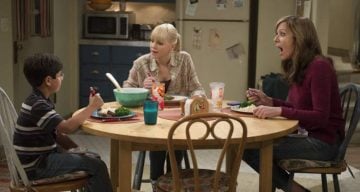 Mom hit its 100th episode last night! The mother-daughter duo of Bonnie and Christy have not failed to entertain us throughout the show’s five seasons, but many fans want to know where Christy’s kids are now. Violet and Roscoe have not made appearances on the show for a long time. So, what happened to the kids on Mom? Keep reading to find out!

After its 2013 premiere, Mom has been a staple when it comes to sitcom comedy. The show made us laugh while dealing with sensitive issues like alcoholism, drug abuse, and teenage pregnancy.

While Bonnie and Christy are the leading characters of the show, many fans adored Christy’s two kids, Violet and Roscoe. But the two young stars have appeared in only a few episodes since season 2.

Where are the kids on Mom? Here’s everything we know about what happened.

Who Are the Kids on Mom?

Mom, the TV show, follows the journey of Anna Faris’ character, Christy. She is a single mother and recovering alcoholic, who attempts to rebuild her life.

Swipe to check out some of our favorite pictures from our #Mom100 episode party! ??

Sadie Calvano plays Violet Plunkett. She was portrayed as a high school senior when the show began.

Fans followed Violet’s journey as she went on to have her boyfriend, Luke’s baby, get engaged to a professor at her college, and then get back together with Luke in season 4.

Roscoe, played by child actor Blake Garrett Rosenthal, is Christy’s son with Baxter, her ex-husband. Fans fell in love with the cute little kid they saw grow up on the show.

Audiences especially loved the way he stood up to Luke in season 1. But his experimenting with marijuana as a 12-year-old was enough to give anyone a heart attack!

What Happened to the Kids on Mom?

Fans may notice that the kids are missing in the family portrait of Mom’s season 5 opening sequence.

So, what exactly happened? Are Violet and Roscoe not part of the show anymore?

The show’s creator, Chuck Lorre, has some answers.

In an interview with Variety, Lorre spoke about his decision to put the focus back on Bonnie, Christy, and their recovery group. He said that even though it was “very difficult” to not include Violet and Roscoe in the script, that’s the direction the creators envisioned for the show.

“Women helping women recover from the seemingly hopeless disease of alcohol and drug addiction provided this extraordinary ensemble of great actresses that were funny in different ways. In loving each other and supporting each other, they survive not as individuals—the me is overridden by the we,” Lorre said.

Where Are Violet and Roscoe Now?

Even though Violet and Roscoe won’t be making regular appearances for now, they will always be remembered by Mom fans.

The young stars know that Mom was a significant part of their lives. Sadie Calvano and Blake Garrett Rosenthal posted about Mom’s 100th episode celebrations on their Instagram accounts. After all, this is the show that made them famous!

We don’t know if Violet and Roscoe will ever return to our screens, but we know that they will always be a big part of the success of Mom! Perhaps a few guest appearances down the line?