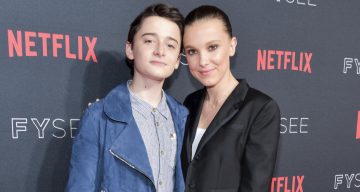 Stranger Things fans picture Eleven and Mike getting together. But outside the Upside Down, it’s Millie Bobby Brown and Noah Schnapp that are giving us all the couple feels! Brown, who portrays the psychokinetic Eleven, and Schnapp, who was Upside Down’s missing child Will, danced together at the Netflix Pre-Emmys party and now everyone is going crazy over how cute they look as a couple! So, Are Millie and Noah dating? Sadly for a lot of fans, they aren’t. But that doesn’t stop us from gushing over them anyway!

If you haven’t watched Stranger Things (in which case, what are you doing? Go watch it now!), Eleven (Brown) and Mike (Finn Wolfhard) have their little puppy love going on in the Upside Down world. They actually meet because Mike’s friend, Will (Schnapp), is trapped in the alternate dimension.

But outside of Stranger Things, Millie Bobby Brown and Noah Schnapp have displayed their profoundly close friendship to the public. They feature each other in their Instagram posts, they hang out together, they do the #InMyFeelings challenge together, and casually hold hands at red carpet events. They are adorable together in reality—and fans just eat it up!

this right here… is my person 4eva ❤️

Brown shared some Instagram posts with Schnapp recently that has everyone shipping Eleven and Will hard. In the post (where they attended the New York Fashion Week together), she calls him “my person 4eva” with a heart emoji.

And on Saturday (September 14), the tweens hit the dance floor at Ted Sarandos‘ 2018 Netflix Emmy Nominee Toast. They bust out a few moves to Cardi B’s “Bartier,” and Brown shared that clip on Instagram.

Schnapp even shared the video of the two of them on his Instagram story with a “Who is the better dancer?” poll!

schnipper and i are extremely excited for the emmys!!! ?

While these are just kids having fun dancing like no one’s watching, social media can’t help but gush over how cute they look together! Many love their friendship and can’t help but comment. 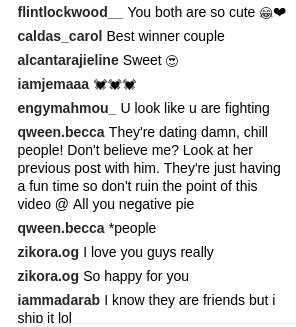 Others think they could and should be a couple. Few have even come up with their own couple name for them; “Nollie.”

While there are no reports of Schnapp having dated anyone in the past, Brown has been romantically linked to social media star Jacob Sartorius for a while now. But the Brown and Sartorious dating rumors have been met with mixed reactions.

It appears that many would love Brown and Schnapp together. A few, however, just want these young actors to be kids for now, without fans telling them they should date.

They are, after all, still just a couple of 14-year-old friends enjoying themselves. So, we shouldn’t read too much into their displays of affection.

Either way, we’ll see them return as Eleven and Will with the rest of the gang when Stranger Things season 3 premieres in 2019! Excited?

Also Read: Who Is Noah Cyrus Dating? Did She Breakup with Tanner Drayton?