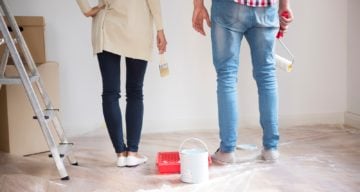 Magnolia Network’s Restoring Galveston has turned married home improvement duo Michael and Ashley Cordray into saviors of Galveston’s history. Through their business, Save 1900, and the show, the couple has restored historic properties in the Texas town and flipped them. It all started when Ashley Cordray saw the opportunity to build something together with Michael Cordray’s background. He has roots in this historical town and its old houses that he has worked to restore. We reveal more of that about Ashley Cordray’s husband in this Michael Cordray wiki.

Michael Cordray was born on March 18, 1982, and is a native of Galveston, Texas. His mother, Helen “Bootsie” Cordray, was also born and raised in Galveston.

His father, Emil Cordray, passed away in 2007. Emil was best known as an avid coin collector in the local community. Michael recalled one of his first jobs was selling coins with his dad.

Michael Cordray graduated from Texas A&M University at Galveston (TAMUG) in 2006, from the same marine biology course his future wife, Ashley, would graduate from three years later. He went on to work at Kirby Inland Marine, where he met Ashley.

Michael’s father owned and rented houses in their hometown, so Michael gained construction experience from that. In fact, he said that the Cordray family had owned old homes in Galveston since the 1800s, and restoring them was in his blood.

In the early stages of the couple’s relationship, Ashley found a way for her to connect with Michael’s roots by suggesting they flip relic houses in Galveston. They flipped one house in 2011, shortly after they began dating.

As they embarked on their home renovation journey, they still kept their full-time jobs. But Ashley decided to leave hers and then convinced Michael to quit his desk job so that they could both fully devote themselves to their joint venture.

“When we started, we both had corporate jobs and we were working on the houses on the weekends and it was just going really slow,” Michael recalled. “We’d do like a house a year and Ashley would kind of harass me everyday to quit my job so we could do this full-time and after a year and a half of being asked everyday to do that I kind of gave in. There were so many houses in Galveston that were older and awesome that needed love and we just couldn’t work on as many as we wanted to if we still had full-time jobs. You know, houses were being torn down due to neglect and stuff like that. Many of these houses had survived countless hurricanes and the 1900 storm and all these massive events, and you know they’re just being lost to people not caring about them so we decided to quit our jobs and care about them.”

In 2016, Ashley and Michael started their real estate and restoration company, Save 1900. They are passionate about saving historical houses that survived the 1900 hurricane that wrecked Galveston and other dilapidated properties that would later pave the path to Restoring Galveston.

Shortly after the couple began Save 1900, HGTV producers were looking for their next reality stars for home restorations in Galveston. Ashley was reluctant initially because they didn’t have enough experience. But Michel believed that they were home reno reality material!

They contacted the producers and filmed a sizzle reel for HGTV. Producers were impressed enough to order a pilot on HGTV’s sister network, DIY Network. But to make the show work, Michael and Ashley Cordray took out a massive loan to buy eight properties they would renovate and flip on the show. Additionally, they had to roll up their sleeves for the best bargain finds in decor.

Their show, Big Texas Fix, premiered in 2019 and was a big hit. They returned for a second season after rebranding the reality series to Restoring Galveston and with a bigger team of contractors.

Michael Cordray met TAMUG alum Ashley Youngblood when she began working at Kirby Inland Marine. They began dating in 2011 and were married on April 4, 2014.

Their oldest daughter, Elle Lane, was born on November 25, 2019, when they were filming the second season of Restoring Galveston. Ashley gave birth while the crew was on break and returned to fixing properties three days later.

Their youngest daughter, Emma, was born on May 24, 2021. There was no stopping this couple then either. They filmed the fourth season of Restoring Galveston and even gave glimpses into their little family.