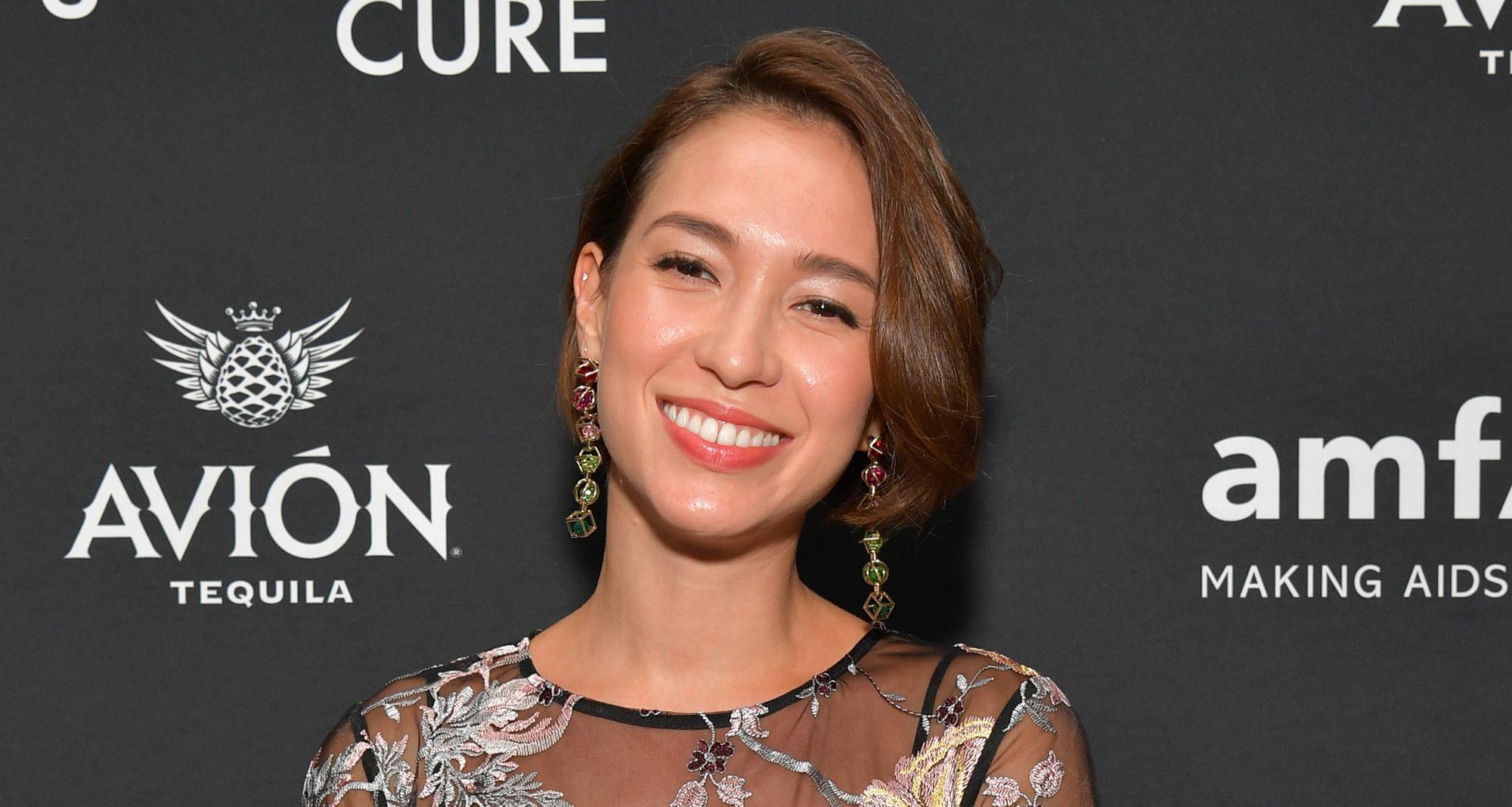 Have you heard of Henry Golding, the star of Crazy Rich Asians? He’s the Asian sensations stealing all of our hearts as the lead heartthrob in the new hit film, giving us all boyfriend goals. Outside the movie, this romantic leading man is the definition of #husbandgoals. He and his wife, Liv Lo, are quickly getting noticed for being the most adorable couple ever. But who is she? Our Liv Lo wiki has all you need to know!

Henry Golding gave Constance Wu (and the majority of us) major Prince Charming vibes on Crazy Rich Asians. IRL, he’s the Prince Charming of the gorgeous Liv Lo—and we can’t even be jealous! This romantic pair adore each other so much and are so good-looking together, people have been fawning over their love ever since the premiere. Don’t believe us? Our Liv Lo wiki will prove it.

She Has a Multi-Ethnic Background

The couple boasts a Euro-Asian heritage. While Henry Golding is of a mixed Malaysian and British descent, Liv Lo is Taiwanese on her mother’s side and Italian on her father’s side. Born in Taiwan on May 21, 1985, Lo 33 years old, 18 months older than Golding.

The couple lives in Singapore, but Golding’s global popularity with Crazy Rich Asians means they’re currently traveling all over the world. But it’s no big deal to Lo, who has traveled often because of her dad’s work.

“I got to travel a lot around Asia because my dad produced music. When I was very young I got to live in Japan, Hong Kong, and China before settling in Taiwan. Wherever the music would go, my dad would take us,” said Lo. She credits the immense cultural exposure to making her wise beyond her years. 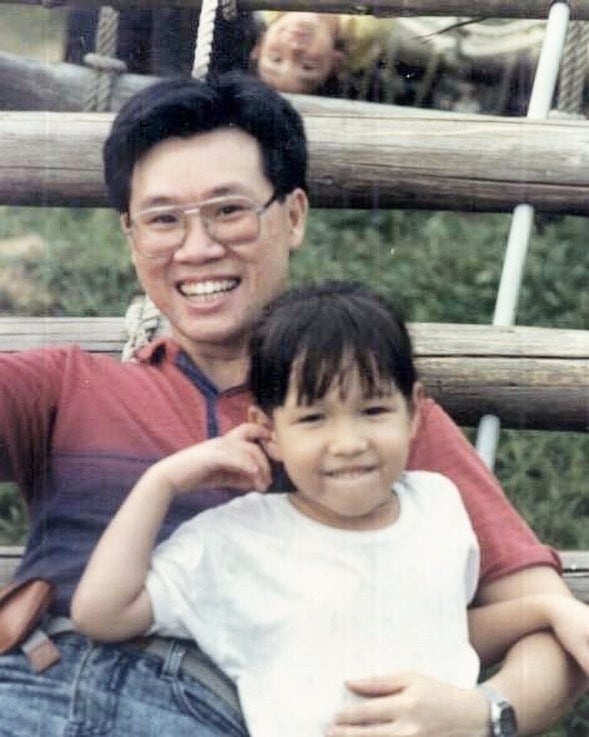 Liv and her sister, Leeza Pazkowski are close to their father, Richard Lo. Her parents have been together for 36 years.

With her diverse ethnicity, she has studied, lived, and worked in different countries. Lo is fluent in Mandarin and Japanese.

And her beauty is quite obvious. She began modeling in Taiwan at the age of 17. Intent on an expansive entertainment career, she moved to Tokyo.

There, she attended Temple University Japan while modeling. She pursued her Bachelors degree in mass communication while rising to one of the top models of Japan.

She Met Henry at a Club

On the first day of January 2011, an ideal date that lines up with 1/1/’11, Liv Lo met “the one” for her at Filter Members Club in Singapore. The more she and Golding dated, the more they felt they were a natural fit together, even as they were initially in a long distance relationship. 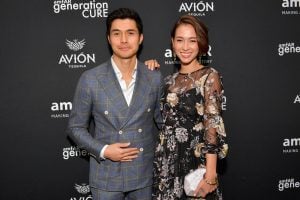 For Lo, it took a literal natural disaster to know that Golding was the one for her. That disaster was the March 2011 Japan Tsunami, which struck when Lo was in Tokyo.

After their first date, Golding gave her a note that read, “If you ever need me, I will be there.” He stuck to his word and braved turbulent conditions to bring Lo to Malaysia where he was working.

“At first I thought he was too young for me, but he really stepped up when the tsunami hit. The demonstration of character proved that he is a man of his word; that he is serious about our relationship and cares about me,” said Lo.

A year into their long distance relationship, Lo moved to Singapore to be with Golding.

He Proposed to Her in Thailand

They spent their fourth anniversary together vacationing in Phuket, Thailand, where Golding gave her the best day of her life there—and then topped it with a proposal!

Lo didn’t know at the end of riding bicycles on the beach and savoring spicy Thai food, she’d be at a restaurant with a classic romantic setup. Set in the background of a sunset, Golding arranged for champagne and a string quartet just for them. (Okay, he really is Prince Charming!) 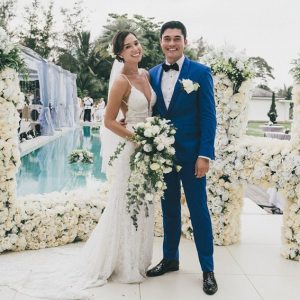 I just thought he was being romantic as it was our anniversary,” gushed Lo. “However, we took a stroll on the rocks and he proposed at the magic hour. Unforgettable.”

Golding planned every detail of the proposal, even thoroughly researching rings for the perfect engagement sparkler. He designed a special engagement ring just for her, inspired by the teardrop cut diamond.

They tied the knot on August 20, 2016 at Kuching, Malaysia, with an Iban-style wedding to honor Golding’s Iban roots. Their hashtag #mrandmrsgolding has pictures of their fairytale wedding and Croatian honeymoon that will restore your faith in love.

Lo had a thriving modeling career, even being featured on the cover of Vogue Taiwan. She modeled for brands like Michael Kors, Tory Burch, Armani Exchange, Roberto Cavalli, BMW, Maserati and more. Her face has been plastered on billboards in Harajuku in Tokyo. She was even a TV reporter for FOX TV in Japan.

Her plans were always to diversify her career, and Singapore was the place to be. Her plans to move there advanced when she began dating Golding.

In Singapore, she redefined her career in entertainment, securing a spot in the TV show, Point of Entry. She has since hosted shows like Style Setter and Asia’s Next Top Model.

However, she’s most popular in Asia as a fitness icon. A certified yoga instructor, she shares fitness regimens on YouTube. She designed the FitSphere exercise program and teaches classes weekly.

Fun fact: She was never really into exercise. But with a great teacher, she fell in love with yoga. With over a decade of practicing, Lo is Asia’s fitness star and a brand ambassador for Reebok.

When she’s not imparting her yoga knowledge, Lo is doing press junkets for mega movies like Skyscraper, Black Panther, Captain America Civil War, Star Wars Rogue One and Guardians of the Galaxy 2.

Despite their hectic schedules, Lo and Golding find ways to spend time together, sometimes even organizing their calendars around each other.

If you need any more of a reason to fall madly in love with this adorable couple, check out their interview for Malaysia’s Harper’s Bazaar February 2018 cover shoot, which these two landed just months ago!