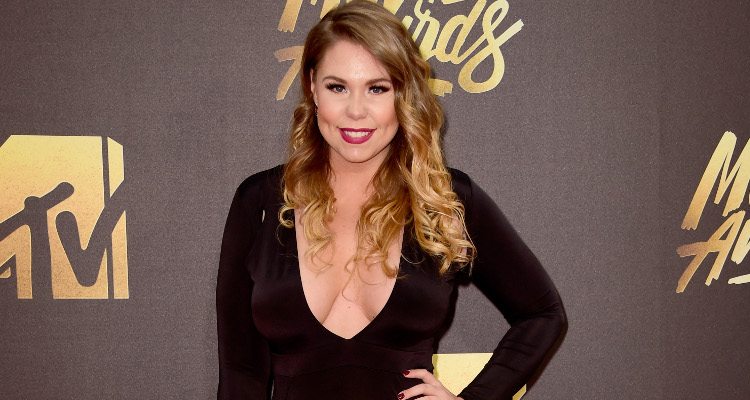 Kailyn Lowry surprised fans of Teen Mom 2 when she revealed that she’s in a relationship with another woman; Lowry’s pal, Dominique Potter! She was once her rumored girlfriend, and the latest episode of Teen Mom 2 appears to confirm the news.

It looks like we’re finally getting a look at Kailyn Lowry’s latest relationship. The Teen Mom 2 star revealed towards the end of 2017 that she’s not only in a new relationship, but is dating a woman! It was speculated that Lowry’s social media BFF, Dominique Potter was the rumored girlfriend. But their relationship, sadly, didn’t last. After much speculation, Teen Mom 2 is giving us a glimpse into Lowry and Potter’s developing relationship.

Who Is Dominique Potter?

She studied at Kean University in New Jersey. Dom is also extremely athletic, going by some of her Instagram posts.

She has a big heart and is active in philanthropy. From the looks of it, she’s also a great friend to have.

Dom became a social media celebrity since her relationship with the reality star. Her Instagram following shot to 26.9k followers, though she has now set her account to private.

But even those who lurked her Instagram and Twitter just because she was associated with Kaily, may have noticed that she’s actually pretty cool. Now, fans can’t get enough of her unique witticisms, and awe-worthy personality.

Her Twitter also tells us that she’s a fan of Khloe Kardashian, and relates to her words of wisdom. Or it could be that Dom retweeted Khloe’s recent posts because she might be in the same boat as a new mom…

Back in November 2017, Kailyn Lowry was on Lindsie Chrisley’s Coffee & Convos, where she gushed about her new relationship. Lindsie asked the famous mom of three if she had a girlfriend, and Kailyn said yes.

“We were friends for a year and so it kind of just turned into [a romantic relationship],” confessed Lowry adding, “So, it’s not like she was trying to wine and dine me to ask me to be her girlfriend, you know what I mean? It more or less just happened.”

She didn’t reveal the identity of her girlfriend at that time. However, Dom was featured prominently in Kailyn’s social media posts back then, and they looked pretty close. It was speculated that Dom was Kailyn’s girlfriend.

They were apparently friends for a long time before they began dating. Past shots posted to their Instagram accounts reveal that Kailyn introduced Dom to her kids.

Do I have to be gay or straight? Can’t I just love people?

It was first speculated that Lowry might be bisexual in 2016. At that time, the author tweeted in response, “Do I have to be gay or straight? Can’t I just love people?”

Last night’s (May 28) Teen Mom 2 was the first appearance of Dominique Potter. It was still a fledgling romance as of that episode which tells us that we’re going to see their relationship develop during this season.

The episode picked up after the reunion drama, which saw Kailyn get into a shouting match with Briana DeJesus, the woman her ex-husband Javi Marroquin was dating. Kailyn expressed her relief that Javi is now dating someone, so he will leave her alone.

She now has two friends, Becky and Dom, to keep her mind off the drama. Kailyn and Dom attended a benefit for Puerto Rico after Hurricane Irma. Their appearance at the event months ago added to the speculation of their relationship, too. Kailyn and Dom reportedly looked like more than just friends back then.

Kailyn joked that Dom and Becky were better father figures for her children. Her friend said the three of them were like “Two and a Half Lesbians.”

“Am I the half then?” was Kailyn’s response.

As they were driving home, Kailyn received a text from someone asking her the million dollar question; “I was wondering if your friend Dom was your new girlfriend and you didn’t wanna tell me.”

Kailyn couldn’t decide how to respond to that question. But Dom was also anticipating her response. It’s obvious at this point that these two have some feelings about each other, which looks like it may grow into something more.

Not a Fairytale Romance

The Teen Mom 2 reunion special was explosive for too many reasons to count. Not only were there expletive-laden fights between castmates and Briana DeJesus, some shocking revelations were also made.

If you’ve been keeping track of all things Teen Mom, you’ve probably heard that Javi and Briana broke up in January 2018. Things went further downhill when Kailyn admitted at the reunion special that she and Javi hooked up right after his breakup. (Gasp!)

We presume Dom didn’t take this bit of news very well. She replied to the exposé by The Grace Report in a tweet confirming that she and Kailyn were dating when she hooked up with Javi.

Wow. Lol she was actually dating me at the time…. thanks for the info ??

Since then, Dom has been posting cryptic tweets that many think are subtle jabs at Lowry, which continued through her debut on Teen Moms 2 last night. Even retweeting Khloe Kardashian appears to be in response to Lowry’s cheating. ICYMI, Khloe’s baby daddy, Tristan Thompson was caught on camera cheating on her.

Their breakup was confirmed when Kailyn tweeted she’s single. Just to pile on the burn, Dom retweeted that post with a little addition of her own.

Kailyn’s pictures have been scrubbed off Dom’s Instagram before she turned it to private. So, all the signs point to a breakup.

It remains to be seen how Kailyn Lowry and Dominique Potter’s relationship went downhill when Teen Moms 2 airs Mondays at 9:00 p.m. EST on MTV. Don’t miss the drama!