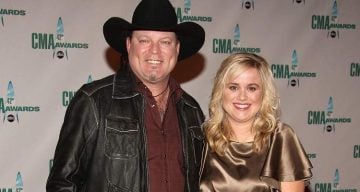 While the country music singer himself is decently famous, not many are familiar with John Michael Montgomery’s wife. Not to worry because we have some interesting information about her for you, right here. Keep reading to know more about her in our Crystal White wiki.

Crystal White is John Michael Montgomery’s wife. The couple tied the knot on January 8, 1996. While Crystal White’s age is not known, we do know that she was Montgomery’s long-term girlfriend before they got married. Since then, their relationship has been a blissful one, and seems to only get stronger with time.

John Michael Montgomery and Crystal White have two children together. Their daughter, Madison Caroline was born on August 27, 1996. And Walker Carl, their son, was born on February 13, 1999.

My kids and me with my brother eddie pic.twitter.com/cyOqPdqrPI

When asked about his success, John Michael Montgomery once revealed, “I grew up in trailer parks, so things like that aren’t supposed to happen to me. I had surgeries, I had anxiety attacks, I had rehab. Considering where I came from, I went straight out of high school to get my honky tonk degree, I feel I accomplished pretty much.”

Montgomery then praised his wife, saying that she stood by him through all his downs and helped him overcome his problems. Well, as we all know, behind every successful man there stands a woman.