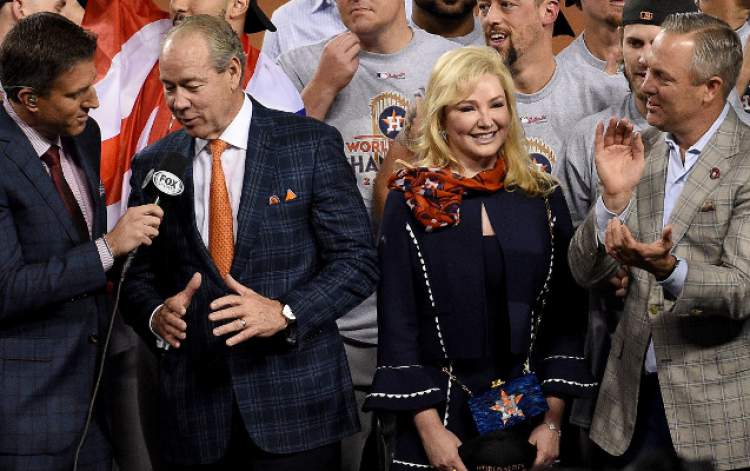 The Huston Astros now have their monumental moment after winning the World Series. Owner and chairman Jim Crane was more than elated about leading the team to its first championship victory. In light of this, we are celebrating the Astros’ families and wives. Read on to know all about Jim Crane’s wife, Whitney Wheeler Crane.

Whitney Wheeler Crane was by her husband’s side when he picked up the World Series trophy, the first one for the Houston Astros. The billionaire purchased the team in 2011 for a reported $680.0 million, and it all seemed to work out in the end!

Find out more about Jim Crane’s wife in our Whitney Crane wiki.

Whitney Wheeler was born on February 18, 1969, making her age 48. She is a true California girl and went to Pinewood High School in Los Altos before attending California Polytechnic State University.

Crane then married the founder of Houston Cinema & Arts Society, Francigene Neely Beck, three years later. The couple were married for 21 years but didn’t have any children. The two divorced in 2015, with Beck reportedly getting a $30.0 million settlement to be paid over a period of five years.

It was around the time of their divorce settlement that Crane met Wheeler, who gave birth to his youngest child, James Robert Crane II, shortly after. In June 2017, the two got married with their now three-year-old at their side.

As they say, third time’s the charm! The couple got married at Crane’s Floridian National Golf Club, which was turned into a fantasy land for a night. The pristine white setting perfectly matched Wheeler’s light blue and white floral netted gown as she kissed her husband in the sunset.

Two huge swans decorated with blue delphiniums, gardenias, orchids, and hydrangeas, as well as white roses stood behind the couple, adding to the romantic setting.

James Robert Crane II was at the center of the action, while Clay Walker performed for the couple. Although they booked Bruno Mars to perform, it was for an earlier wedding date when the couple was still finalizing their plans.

The reception was even more luxurious with a seven-tiered cake and custom dance floor.

Although there is no information on Whitney Wheeler’s net worth, we do know that her husband is fully loaded. Jim Crane’s net worth is estimated to be an astronomical $2.0 billion.

Along with being the Houston Astros owner, he is a majority stakeholder of Crane Cartage Freight Service, Champion Energy, and the chief of Capital Group.