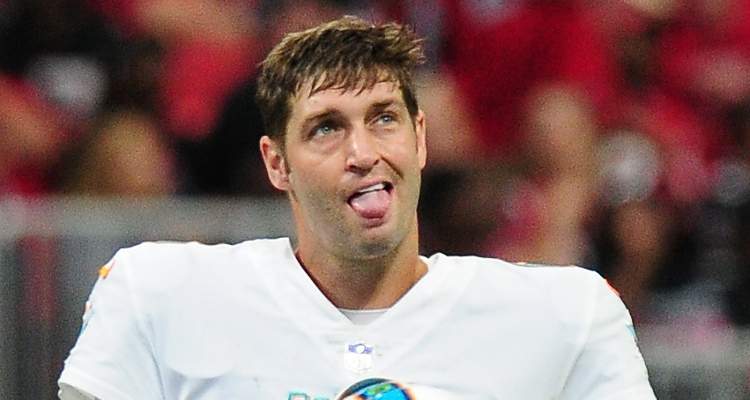 You may know Jay Cutler. Professional footballer, was on TV, married to Kristin Cavallari, came out of retirement, occasional meme material provider…the usual. It appears that all he has to do is step out onto the field and he sets off the next meme trend.

Once in a while, Jay Cutler will step on the field, and unintentionally make a fool of himself —and we love him for it! The former Chicago Bears quarterback retired after the 2016 NFL season for a short career in the Fox Sports broadcast booth. He came out of retirement this August to save the Miami Dolphins after Ryan Tannehill suffered a season-ending injury. He was only back for a day and inspired a wave of memes.

The Internet realized the buzz-generating power of Jay Cutler memes back in 2014. We all know how “expressive” (note the sarcasm) Cutler can be. It didn’t take long for his impassive face and lackluster performance to turn into Internet greatness. After his unsportsmanlike behavior towards Bears teammate, J’Marcus Webb was caught on camera, Cutler inspired the “Smokin’ Jay Cutler” meme. Images of a blank-faced Cutler photoshopped with cigarettes became one of the most popular sports memes in history. Even Green Bay Packers’ Aaron Rodgers paid tribute to that meme on the field.

At Monday night’s game where the Dolphins lost to the South Carolina Panthers, Cutler handed the other team victory on a platter. He meant to pass the ball to tight end, Julian Thomas. Except Panthers’ Luke Kuechly was directly between them. Despite having all the time in the world to not throw the ball towards Thomas, Cutler did and Kuechly intercepted it. And no one’s even surprised. That’s Jay Cutler for you! This incident has revived interest in the timeless ‘Smokin’ Jay’ and we’re here for it. Check out the most hilarious Jay Cutler memes the Internet has to offer, right here.

#2. Get back to the game they said. It would be fun they said.

#4. That face when you show up to the party you were literally invited to at the last minute.

Now that is a funny Jay Cutler meme ??? pic.twitter.com/EiKaGBF5RT

#6. Is this why he came out of retirement?

What's a #SmokinJayCutler ta do?

#7. Look at the beautiful view.

#9. Jay Cutler’s funny when he’s not on your team.

I have faith in Jay Cutler but this was too funny pic.twitter.com/PpiRLDArPG