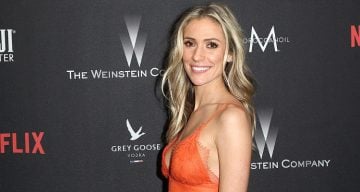 Ever since Jay Cutler was released from the Chicago Bears last month, he hasn’t been signed by any other team and is facing retirement. But that’s the last of the quarterback’s worries as he vacations with his wife, Kristin Cavallari.

Jay Cutler’s wife, Kristin Cavallari posted a very cheeky (literally) picture of him on their vacation. But it looks like Cutler may have reason to put clothes on now that Tony Romo has retired, opening up a quarterback spot in the NFL! Cavallari will be happy for him either way. We haven’t seen her much on TV these days, but she’s definitely not out of the limelight. To jog up the memories of reality TV fans, we’ve compiled Kristin Cavallari’s wiki.

Cavallari was a junior in high school when she made her reality TV debut on Laguna Beach: The Real Orange County, long before reality drama was conquered by the Kardashians. At that time, she was involved in an on-again off-again relationship with her costar, Stephen Colletti, which led to a rivalry with Lauren Conrad. The trio’s dynamics became the main subject of the show.

In 2009, she joined the cast of the Laguna Beach spin-off, The Hills. Her rising fame landed her on TV’s glitziest dance reality competition, Dancing with the Stars season 13. She was partnered with two-time champion, Mark Ballas, but were the third couple to be eliminated.

After Laguna Beach, she moved on from MTV to UPN with the new reality series, Get This Party Started. As luck would have it, UPN canceled the show after airing only two episodes. She ventured into acting with guest roles on Veronica Mars and CSI: NY among other film and television credits.

#2 .The Fashion Icon with the Successful Business

The Hills ladies were famous for their trendsetting style. Cavallari established herself as a fashion icon in the industry and has found success as a designer. She has a line of jewelry and shoes that are available in stores like Nordstrom.

Not even 2 and she's already stealing my shoes. The girl has good taste though! Shoes by me ?

She partnered with her friend Chelsea Bulte to establish their jewelry company, Emerald Duv. The jewelry line took off, but their partnership didn’t last long. Cavallari pulled out of their partnership in the start of 2017 claiming that she couldn’t expand their business. “I felt as though I could never take the company where I wanted to go and felt restricted in everything I wanted to accomplish,” she said.

Kristin Cavallari is now launching a solo jewelry line called “Uncommon James,” which will be released this month. You can see a preview of the collection aesthetic on the Uncommon James Instagram page.

We can't get over yesterday's shoot. #UncommonJames will be launching exclusively at www.UncommonJames.com April 25th!

As a TV personality, designer, and the NY Times bestselling author of Balancing in Heels: My Journey to Health, Happiness, and Making it all Work, the 30-year-old has amassed a net worth of $3.5 million!

Jay Cutler has a net worth of $50 million, which could be impacted depending on whether or not he’s signed to a new team.

#3. She Tragically Lost Her Brother

Kristin Cavallari has two brothers: Michael and Gabriel, but the Cavallari family tragically lost Michael in 2015. On December 10, 2015, Michael was found dead at the age of 30 in the Salt Wash region of Grand County, Utah. Authorities said that he succumbed to the natural elements after his car crashed in a “steep and rocky area.” Hypothermia was the official cause of death.

Michael was found three miles from his wrecked car. His family reported him missing three days before they found his corpse. They initially suspected suicide, but a few months later, investigators ruled it as an accidental death.

It was an emotional period for Kristin, who broke the news to the media. She had given birth to her third child a couple of weeks before losing her brother. “I’ve just been looking to my kids especially for strength, and focusing on them,” she said a few months after Michael’s passing. She paid an Instagram tribute on the first anniversary of his death with a throwback photo and heart-rending words.

My heart is in a million pieces. Mikey, I could always count on you to make me laugh. You had such a good heart and will be forever missed. I'm at a loss for words but I know u are in a better place and finally at peace. I love u so much RIP ?

#4. They Called Off Their Engagement

In 2010, Cavallari was spending a lot of time in Chicago, far from her Orange County reality home. What made Kristin fall in love with Chicago? A new love with the city’s quarterback! Jay Cutler was playing for the Chicago Bears, and things were looking good in their relationship.

As many expected, the so-in-love couple were engaged in Mexico after only a few months of dating. (Oh, reality stars and their quick engagements…) But their fairytale romance was short-lived. The couple wrapped up their wedding registry and were planning a grand wedding, and Cavallari even tweeted about her engagement party, with plans for grand spring wedding. So, you can imagine how devastated she was when, a week later, Cutler dumped her.

In her book, Cavallari explained that it was a simple case of cold feet. They remained friends after their engagement ended, which led to them getting back together a few months later. What helped them mend their relationship was couples therapy.

The wedding was back on, and they said their vows in June 2013 in Nashville. Their then 10-month-old son, Camden, was the star of their ceremony. Guests at their wedding enjoyed Southern comfort food and a Motown band during their reception at a historic warehouse.

Little donut lovers. It's good to be back #Nashville

After reconciling following their brief split, Cavallari announced that she was expecting her first child with her fiancé, and Camden Jack Cutler was born in August 2012. They married when Camden was 10 months old and was wheeled down the aisle on a wagon by the flower girls.

Their second son, Jaxon Wyatt Cutler, was born in May 2014. When Jaxon was 18 months old and Camden was three, they got a sister, Saylor James Cutler, who was born in November 2015.

In March, rumors started swirling that Cavallari was expecting the couple’s fourth child, after she posted a vacation pic on Instagram. She appeared to be holding a baby bump, sparking speculation. But she squashed the pregnancy rumors with another post. It was just the wind puffing up her romper guys! Let’s not speculate about pregnancies until there actually is one!

Crusin' ?: JC . Not sure why it looks like I'm holding a pregnant belly…wind was blowing and I was trying to hold down my romper ?