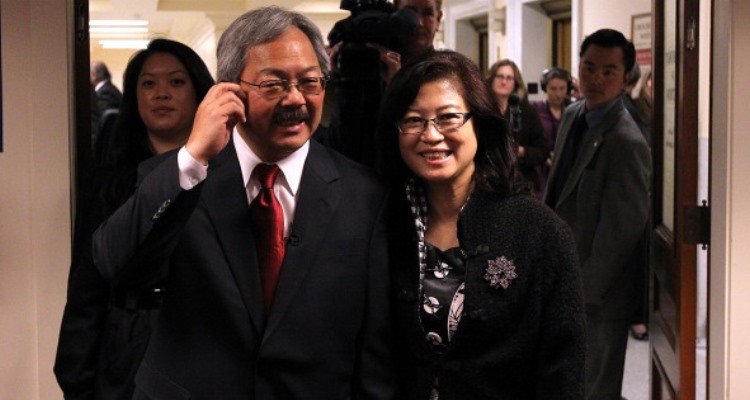 Who is Ed Lee’s wife? Many in the Bay area and the country are asking about her, since her husband San Francisco Mayor Edwin M. Lee, died at 65 years old earlier today. If you want to know more, then here’s a look at our Anita Lee wiki.

Anita Lee’s kids with Ed are daughters Brianna and Tania and the couple got married in 1980. According to San Francisco Magazine, Anita met her late husband in her hometown of Hong Kong in a language-exchange program in 1974. She taught him Cantonese, which he didn’t speak at all but eventually spoke fluently. Despite being in public office, the Lees kept a very low profile and always kept their public lives about business, though they weren’t above sharing a few personal details here and there. But if you want to see a few of Anita Lee’s pics, then you can search online.

Anita’s Mother Told Her to Work

From an early age, Anita’s mother told her not to rely on a man for anything and that having her own money and education was to be expected.

“My mom told me that no matter what, you had to graduate from college and get a job, and don’t think that you can depend on any man. She told me that when I was five years old, and I told my own daughters that when they were five,” Anita told San Francisco Magazine.

Ed Lee’s Cause of Death

On December 12 at 1:11 a.m. local time, Anita’s husband died of a heart attack at Zuckerberg San Francisco General Hospital, according to reports.

“It is with profound sadness and terrible grief that we confirm that Mayor Edwin M. Lee passed away on Tuesday, December 12 at 1:11 a.m. at Zuckerberg San Francisco General Hospital. Family, friends and colleagues were at his side,” his office said in a statement, according to the San Francisco Examiner. “Our thoughts and prayers are with his wife Anita, his two daughters, Brianna and Tania, and his family.”

Ed was born in 1952 in Seattle, Washington but was drawn to San Francisco, where he would eventually become the first Chinese-American mayor. In an interview with the New York Times, Ed said he came to San Francisco because of its tolerance and diversity.

“California, particularly San Francisco, has always been an opening, welcoming atmosphere. That’s kind of what drew me here,” he said. “Being born and raised in Seattle, I wanted to get away from the rain and of course sunny California was attractive. But the main attraction was a kind of feeling that freedom of expression and maybe a person of a different ethnic background could be welcomed and succeed.”

He continued, “People come here to innovate, they want to have the ideas, they want to challenge themselves with different languages and different cultures and be successful at the same time.”

The late mayor will be succeeded by London Breed, the San Francisco board of supervisors president.